A lot has been going on over the last week or so. I’ve continued to plan our wedding, although there’s been a bit of a lull in that. I’ve also discovered a new-to-me television show and because it’s The Great British Bake-Off, that means I’ve also found myself inspired to bake more often. But the biggest news is that we have a new addition to our small family. 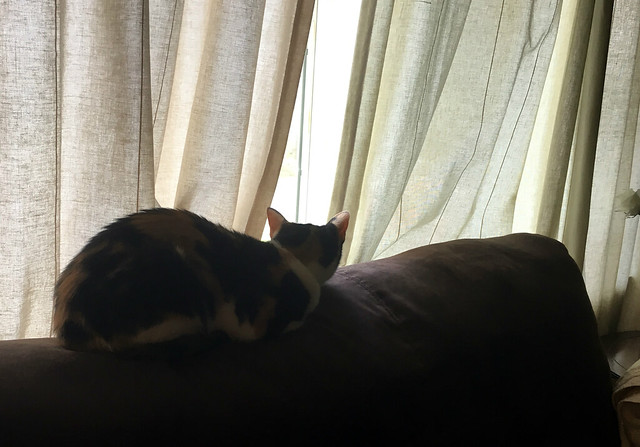 This is the TweedCat. That’s not her real name, obviously, but she’s a rescue and we plan on changing her rescue name anyway. Right now, we just call her “cat” most of the time, and she seems alright with that. She came home on Saturday and has settled in pretty completely.

Her likes include not sitting still, especially for photos, food, and cuddles. Her dislikes seem to include doors, stairs, and when we don’t let her into a room. She’s a very small cat and young enough that she bears being picked up and held with admirable patience, but will let you know when enough is becoming enough. And watching Fiance play with her is a joy. For not-a-cat-person, he really loves her.

So the next few weeks will involve a lot of settling in on all sides. I’m still learning how to cook with a cat constantly coming in and trying to investigate or steal the food. And I think she’s still trying to get used to having as much space as our house affords, but not being allowed to go outside.

2 thoughts on “Happenings and Updates: A New Family Member”