I’m finally going to post a recap of my wedding to Mr. Tweed! Those of you who follow the blog know that we celebrated our wedding over a month ago, but what with travel and things, I haven’t had time to go through the photos until now. Our wedding celebration was a bit non-traditional, although I like to think of it as very traditional. We decided to get married at the local courthouse, which meant that our ceremony would be quite a small affair, but Mr. Tweed wanted to have a dance party for all his friends, so we planned a separate reception the next day for a larger group of people.

During our wedding planning, I drew inspiration from vintage wedding traditions. In Emily Post’s Etiquette, the wedding ceremony and celebration is described as a brief, private ceremony, followed by a breakfast or luncheon at the bride’s family home. To that end, I planned our wedding weekend to be as simple and traditional as possible in this vein. We would be married at the court house, as we don’t attend church regularly and wouldn’t have a local family chapel to stop by. And, of course, we would want to have lunch with those who attended our ceremony. But we also wanted to have a midday party for our bigger reception, since many of our guests were coming from just a two-hour drive away, and having a reception that ended earlier in the day would mean they wouldn’t need to pay for a hotel if they didn’t want. 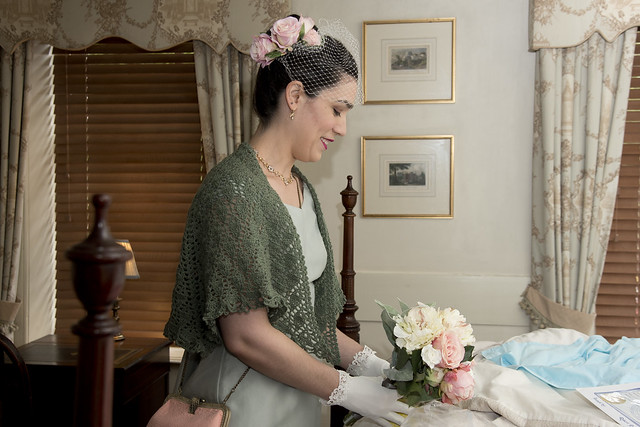 Leading up to the wedding, it seemed the ceremony would be simple, quick, and unremarkable. But I decided to throw a bit of a spanner in the works when I decided I didn’t want to wear the dress I had bought for our ceremony. The dress I had was lovely, but it was full-skirted and designed for dancing, and I had something a bit sleeker in mind when I thought of my ceremony. Against all advice, I put off listening to my gut feeling and ended up buying a new wedding dress two days before the wedding. I had it overnighted from Nordstroms, and received it the day before the wedding. While it wasn’t tailored to me, it was still very close to perfect, especially when I found a friend with a steamer that I could borrow to relax the wrinkles from shipping. With the dress in hand, I packed everything up, and Mr. Tweed and I drove to Annapolis. 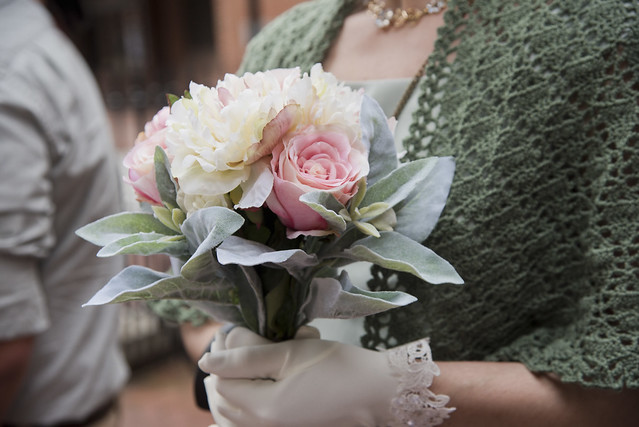 The Jefferson Suite was beautiful, even though the doorways were a bit short for Mr. Tweed. But it was a lovely place to spend our last night before the wedding, and appealed deeply to my sense of vintage whimsy. We spoke to the owner and they agreed to bring us up a tray of breakfast quite early the next morning, as we needed to be getting dressed around the time breakfast would normally be served. We had dinner with my sister and her partner, newly arrived in town from Australia, and then slipped into bed for a good night’s sleep before the weekend’s festivities began.

The next morning, I was so excited, I woke up before 6 a.m. I turned over and chatted with a very groggy Mr. Tweed, and then checked my phone. As the sun came up over the city, I could feel myself getting even more excited for the day. Around 7 a.m., we both showered, and at 8 a.m., our breakfast tray arrived. 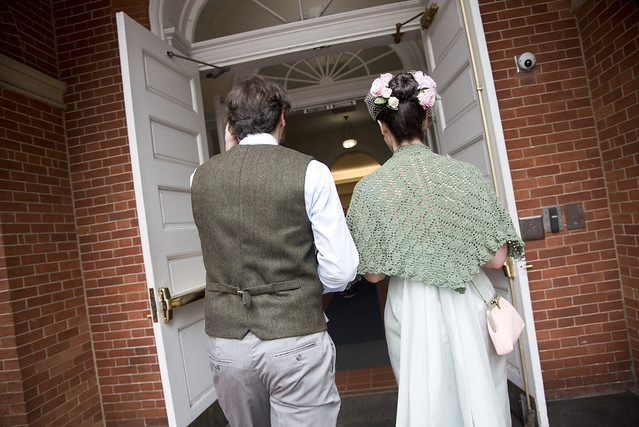 It was fresh scones, cream, jam, tea and coffee, and orange juice! Such a perfect breakfast for a big day. It was light enough (and one of my favorite things) that I was able to eat a good breakfast even on a nervous stomach. And of course I treated myself to plenty of tea. Thoroughly fed and caffeinated, I set to doing my hair and makeup and getting into my dress. As a final touch, I pinned my lovely, custom-made whimsy from Tanith Rowan into my hair. Our photographer Josh arrived at 9:30 and we were off to the court house.

We only had a short wait for the ceremony, but it felt like ages. The ceremony itself was short and sweet. Mr. Tweed and I shared a few moments where we tried not to make each other giggle. Afterwards, we made sure to have photographs with all our various family and friends. Then, we wandered off with Josh for some shots with the two of us before lunch. It was a nice little retreat from the group of family and friends who had come to our ceremony, and gave us some “us” time, even though it was being photographed the whole time. Towards the end, Josh showed us a little secret garden path where we got some beautiful, intimate shots. 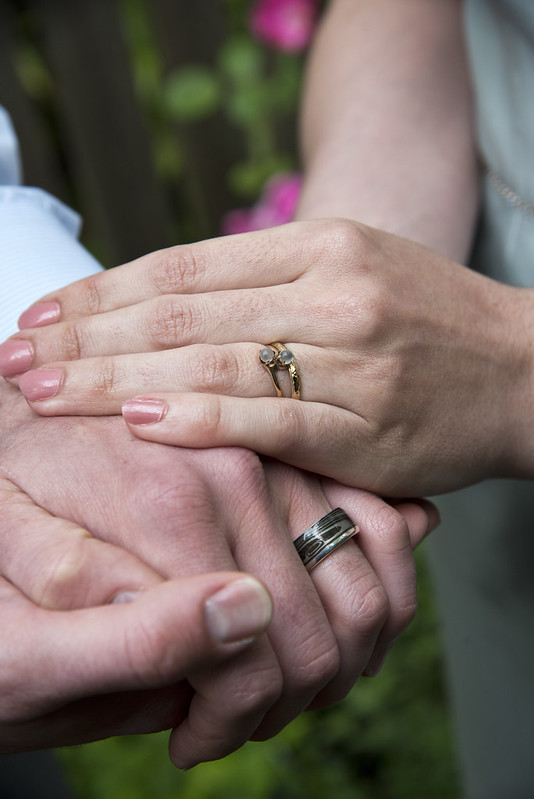 From there, we went back to the tavern and had lunch, which passed in a blur of fried chicken, speeches, prosecco, and caramel cake. But the food was delicious and the company heartfelt. Honestly, it would have been a perfect wedding right there, without anything else. But of course, this is only Part One…