NB: I received these products for review for free from the company, but all opinions are my own. More about my review sample policies here.

I’m going to take a break from recapping Scotland today to continue my reviews of the generous PR samples that I received from White2Tea recently. Today, I’m going to talk about the two full-sized products they sent me. I was absolutely delighted to see that Paul included both a full-sized brick of their ChocoBrick White Tea, and their A&P Black Tea. I tasted both teas by using the recommended brewing methods from White2Tea, as well as brewing the ways I like to enjoy tea. 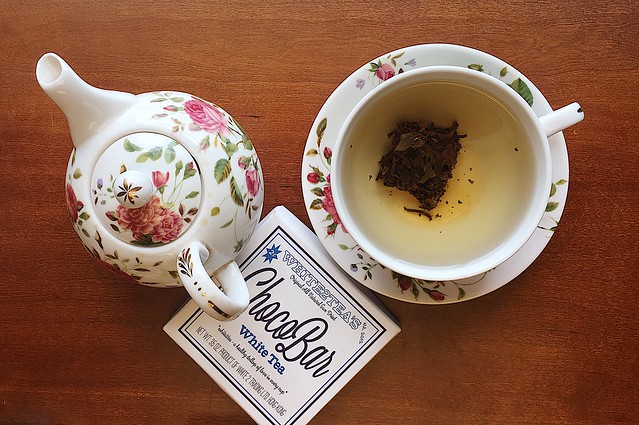 ChocoBrick White Tea: This is a large-leafed, sun-dried Yunnan white tea that has been compressed into a 100g brick that is scored for easy breaking into nine portions. So each portion is about 11g. This is a little much for my 150ml gaiwan, but I did persevere to taste it first in gaiwan. This takes a bit to get going, so the first steep or two were light, but eventually, it brews a very richly-flavored, floral cup of tea. It’s quite pleasant, although I felt like I was wasting too much of the potential of the tea steeping in gaiwan. So I tried it grandpa-style in my large china tea cup and enjoyed that just as much. Honestly, I don’t think I would repurchase this simply because I think it is scored into portions that are too big. Each block can provide so much flavor that I felt like, even steeping grandpa-style over an entire day, I was probably wasting much of the tea’s potential. And the brick is not easy to break except along the scores. So I will probably save the rest of this tea to enjoy with friends, when I’m brewing for more than myself. 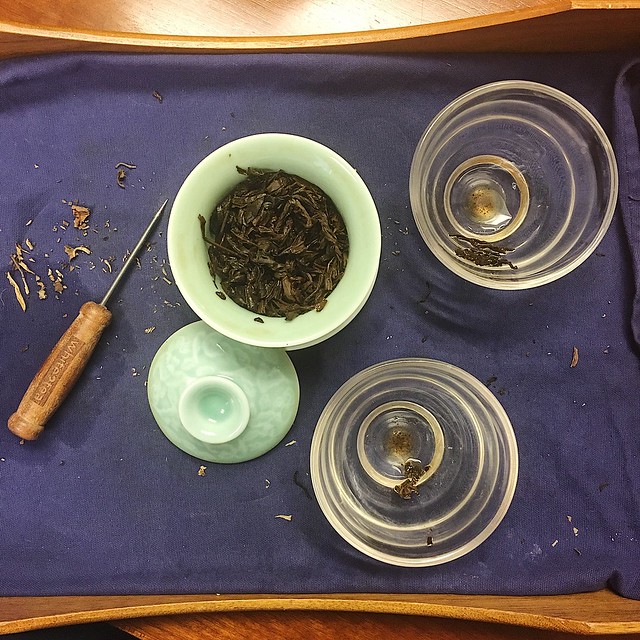 A&P Black Tea: This tea somewhat exemplifies what I think of when I think of White2Tea: an interesting tea, pressed into a cake, and named after a deep literary reference (in this case a short story by John Updike). This is a deep, full-bodied Yunnan Dianhong black tea that has been pressed into a traditional large bing cake. The tea pick that Paul included in the order came in handy for this one. I find it easy to pick off a portion of tea suitable for any style and size of brewing vessel. I did enjoy this in gaiwan, but thought the rich mouthfeel, raisin-y flavors, and round tannins suited a western style of brew as well. I also brewed this up one morning when I just wanted a cuppa black tea, without much attention or care for the leaf, and found it just as delightful. I would buy this again.

All-in-all, I was impressed with these two offerings from White2Tea, but now it is time to move on to their bread-and-butter, the Pu’er teas. Stay tuned for after the Scotland recap finishes for those reviews!