The marvelous thing about staying in Inverness and renting a car is that so much of the north of Scotland is within an hour or so’s drive. So one day, we decided to drive up the coast and visit the fishing and tourism village of Ullapool. Ullapool is about an hour-to-and-hour-and-a-half drive from Inverness, through some beautiful scenery in the north of Scotland. It is one of the easiest places to get a ferry to the Outer Hebrides, although we didn’t plan ahead quite well enough to manage that. But we did enjoy our leisurely drive. One of the most striking things about Scotland is that, even though things are comparatively close together to things in the States (Inverness to Ullapool is about the same distance from Washington, D.C. to just north of Baltimore, for reference), things are quite spread out and that hour-long-drive felt remarkably rural. And the landscape went through so many changes, that it really did feel like a trip-within-a-trip. 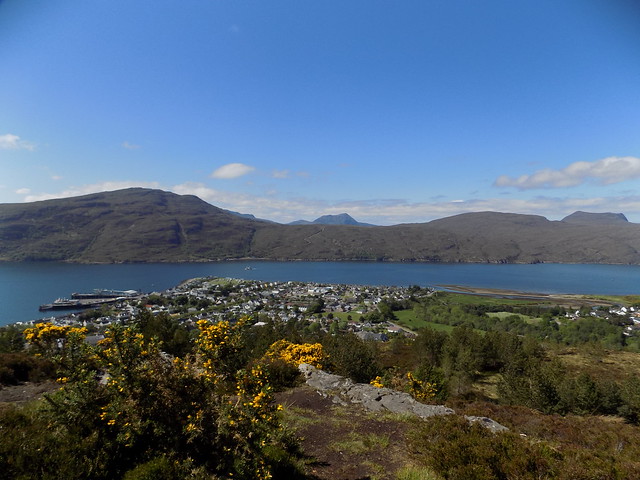 As we pulled into Ullapool, it was obvious that we had managed to show up just before peak tourist season. Also, since we’d just missed the morning ferry to the Outer Hebrides, the streets were even quieter. We found a place to park along the main street in town and went looking for tourism information. Of course, a Visit Scotland bureau turned out to be the place to go, where we had a lovely chat with one of the people behind the desk, and procured a map of the Ullapool Hill Walk, which is a hike up the local hill, starting just outside of town. We applied sunscreen, bought a large piece of flapjack to sustain us on the walk, and set out on our way. 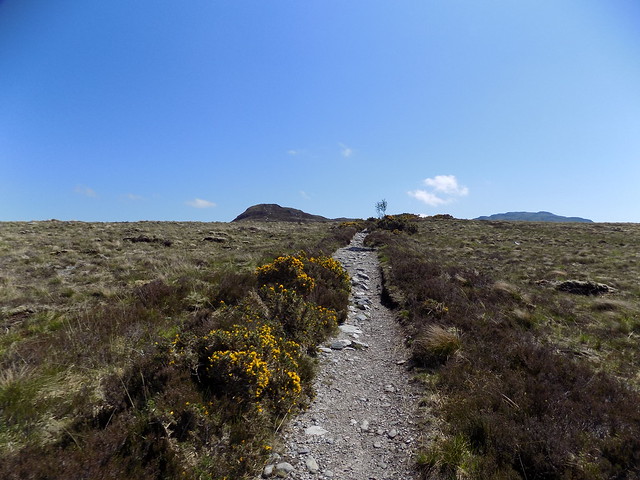 It was a hot day that day in Scotland — record heat, we discovered upon returning home and watching the news that evening — and we certainly felt it on our walk. I was very glad Mr. Tweed had convinced me to bring twice as much water as I thought we needed, and we both reapplied sunscreen a couple of times on the trail. We both noticed that walking excursions seem to be consistently underestimated in Scotland. This “hill walk” was more of a semi-strenuous hike up a fairly steep grade with loose rock and plenty of uneven terrain. But of course we made it and enjoyed it very much. 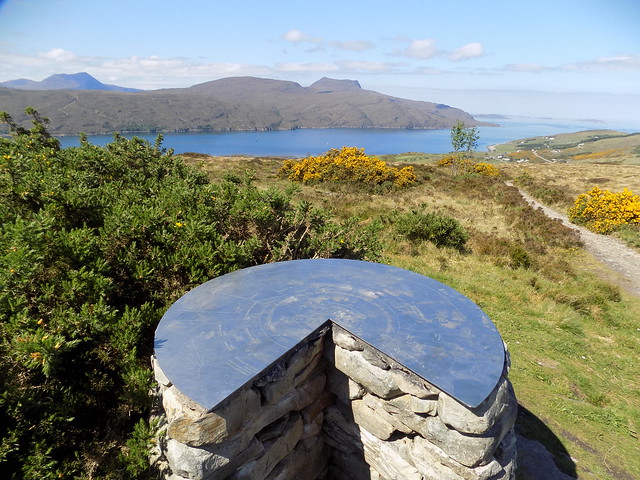 About halfway up the hill, there was a metal disk on a stone platform, which looked somewhat like a sun dial. It was actually a map of the surrounding area, meant to label the different landmarks you could see from that spot on the hill. Very fun to check out. Continuing on, we did eventually make it to the top of the hill, where we ate our flapjack and enjoyed the scenery. And then we went back down. On our walk, we encountered a couple who were obviously on a casual date and several people walking their dogs. It seems that walking on rugged terrain is no big deal to the Scots. Perhaps I need to improve my stamina on my own excursions back home. 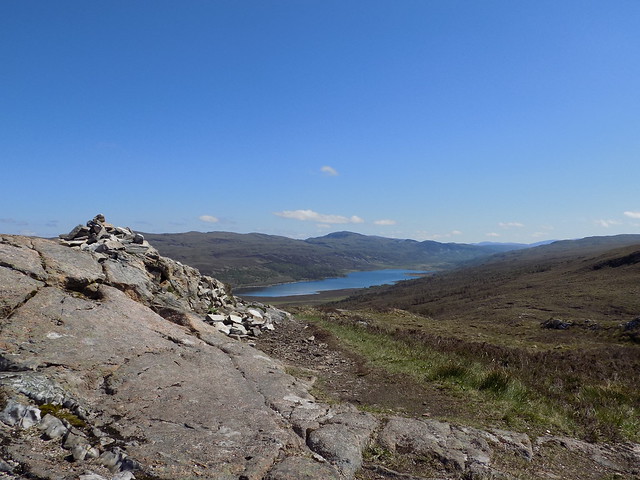 Upon returning to the base of the hill, we found a place for lunch. Ullapool is a fishing town, so seafood seemed the way to go. Mr. Tweed had fish and chips and I had a beautiful fisherman’s pie, washed down with plenty of local lager. From there, we explored the town, even visiting the small local museum, where we learned more about the history of Ullapool. The town was originally made up of sheep crofters and fishermen, but added tourism to its economy in the Victorian era, when Queen Victoria brought Highland tourism into vogue.

Thoroughly explored, exercised, and fed, we bid Ullapool farewell and made our way back to Inverness, just in time for a shower and a trip out for dinner. I would definitely recommend Ullapool as a Highland day trip, and Mr. Tweed even mentioned that he’d like to come back to stay for a while, so we could explore more of the hiking and the trips out to the islands.