For our last day in Scotland, we decided to stick close to home and explore the sites right near Inverness. It seems foolish to visit Inverness and not see Culloden battlefield, the site of the last Jacobite uprising and something that comes up again and again when Scots discuss their history. In fact, I had a woman describe a tartan pattern to me as being “from after Culloden,” referring to the period of time when tartans were outlawed. From there, we decided to visit Clava Cairns to see some history from even further back in the history of the isle. Of course, our Outlander-fan friends warned us to be careful around standing stones around Inverness, but we deemed it worth the risk. 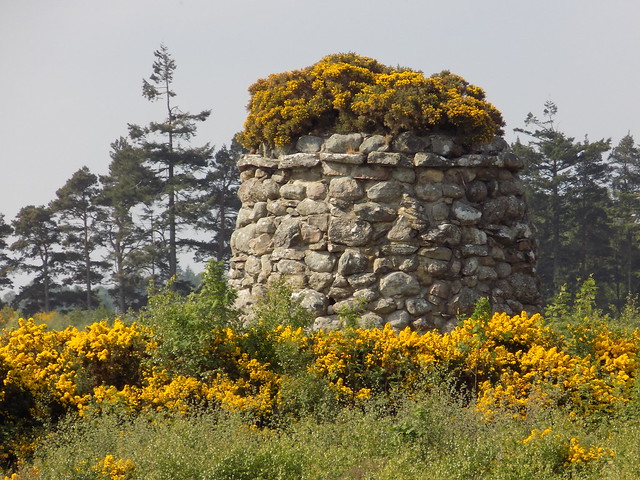 Culloden battlefield reminded me of a smaller-scale version of Gettysburg. It had the same feeling of quiet dignity, with historical information and monuments punctuating a landscape that had mostly reclaimed much of the physical marks of the battle. We opted to skip the indoor exhibit, in favor of walking the battlefield for a while, quietly contemplating the loss of life and the way a single battle changed life in Scotland so dramatically. The loop we took brought us around and to the main Culloden cairn monument and the individual clan grave markers toward the end of our trips. Despite the fact that more tourists had come into town the evening before for the beginning of the bank holiday weekend, the battlefield still held the sense of hush and respect that I appreciated on my walk.

From there, we decided to walk to Clava Cairns, just a mile and a half away. It sounded like an easy walk, but the combination of unseasonable heat, and a route that took us along narrow roads, shared with vehicles, made it a slightly more exciting route than originally intended. But we made it. Clava Cairns is made up of two sites: Balnuaran of Clava, a four-thousand-year-old group of burial cairns built by some of the island’s original inhabitants; and Milton of Clava, a medieval chapel built on the remains of more cairns. The site is popular with Outlander tour groups, and we were fortunate to just miss one group before arriving, so we were able to see the sites in relative peace. 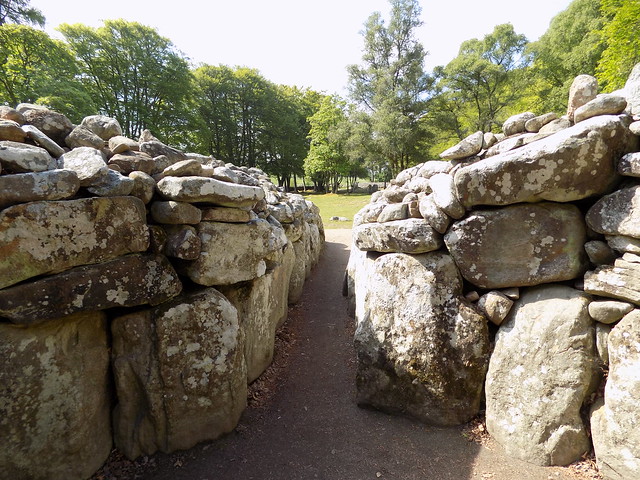 We came first to the burial cairns. During the Victorian Druidic revival, the burial sites were reimagined as being set in an oak grove, and so the Victorians planted oak trees around the cairns. Despite their questionable historical accuracy, the trees were a welcome relief from the heat and sun. The site is still intact enough that you can walk into the passage graves, which provides an interesting view of the site. The other ring graves are open only at the top, and despite the obvious temptation, no one dared disrespect the site by climbing the cairns. 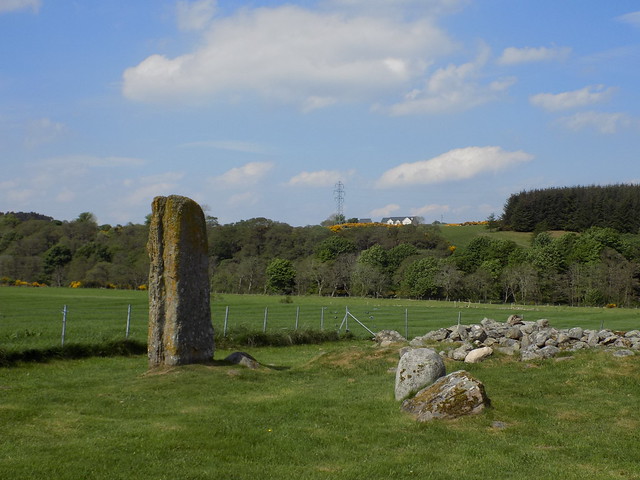 From there, it is another short walk to the Milton of Clava, where another cairn was displaced by a medieval chapel. It’s interesting to see this kind of dynamic history. I commented to Mr. Tweed that it was fascinating to be in a country that has preserved so many of the sites that date back thousands of years before, rather than the mere hundreds that so many American sites claim. And then to see the clash of historical populations in the stones that still stand today, hundreds and thousands of years later is amazing.

After walking back to the car at Culloden, we made our way back into Inverness to prepare for our journey home the next day…

…except that’s not how it happened! It’s not something to dwell on, but many of those who follow me on social media may have noticed we got two “extra” days in the Highlands because our flight out of Inverness was canceled suddenly. Suffice to say, we got to see even the parts of Scotland that we thought had become familiar to us from yet another side, as we navigated last-minute hotels, buses, and taxis. Honestly, it made the arrival home all the sweeter, but also cemented in my mind that I will return to Scotland some day.

One thought on “Scottish Adventure: Culloden and Clava Cairns”