Yesterday, the US experienced a total solar eclipse. While I was not in the path of totality, my little city was fortunate enough to be in the path of a partial eclipse where 84% of the sun was shaded, so I made plans to watch the eclipse with my coworkers in the middle of the day. 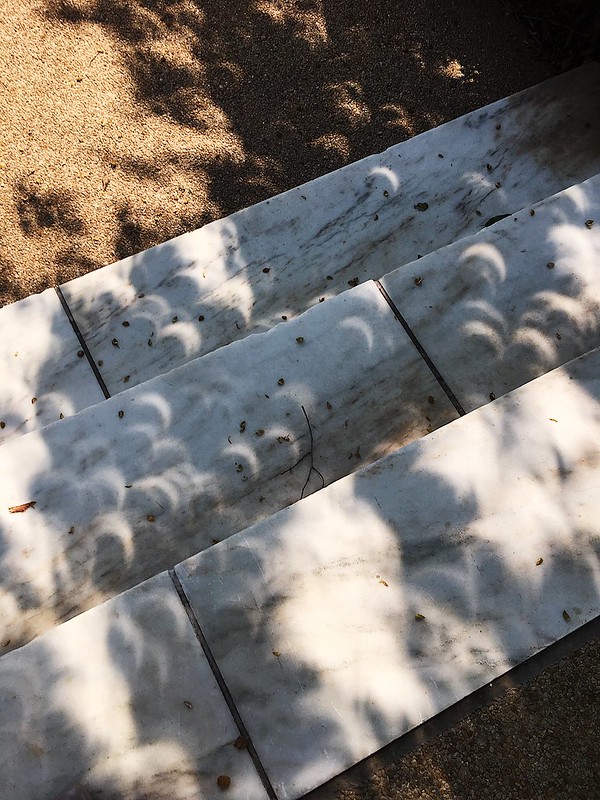 I was able to procure eclipse glasses from our office, and I made myself a pinhole projector with a couple business cards. Duly armed, we gathered to watch the eclipse. The first hour we spent inside, watching out the south-facing window in our office, waiting until we were within a half an hour of maximum before going outside.

Outside, we watched as tourists and office workers alike trickled out onto the National Mall and our own building’s lawn. People with glasses watched the skies, while others watched the shadows. We saw the light begin to make crescents as it streamed through the leaves of the trees, the gaps in the leaves making little pinhole projectors of their own. One woman brought a colander to project an array of little crescents onto the ground.

Eventually, the eclipse reached its peak. We were a bit underwhelmed, as it did not get darker or feel any different to us, out of the path of totality. But considering that even 16% of the sun’s light is still much, much more than what reflects off the moon, that wasn’t surprising. But with eclipse glasses, we could still watch the sun narrow to a tiny sliver in the sky, and watch the shadows warp and then return to normal. Perhaps not the once-in-a-lifetime event that others experienced, but still something.

And perhaps in seven years, I’ll make more of an effort to make it to the path of totality.