As longtime readers of this blog may know, one of my interests is vintage lifestyle, especially vintage style from the U.K. Well, this weekend’s excursion goes back pretty far, even for my tastes. This weekend, I paid a visit to the Maryland Renaissance Festival, a living history festival that presents a themed fair revolving around the court of King Henry VIII. While there are all the typical food stalls, vendors, and shows, the main cast of the festival is the Royal Court and the villagers. The faire itself is held in its own, permanent structure, called the Tudor Village, which is used solely for the faire and its rehearsals. It’s a fantastic experience, and somehow even better when you come back over the years. I typically go one or two times per season, which runs from late August to mid-October. And I know enough people involved in the faire that I often can get discounted tickets! 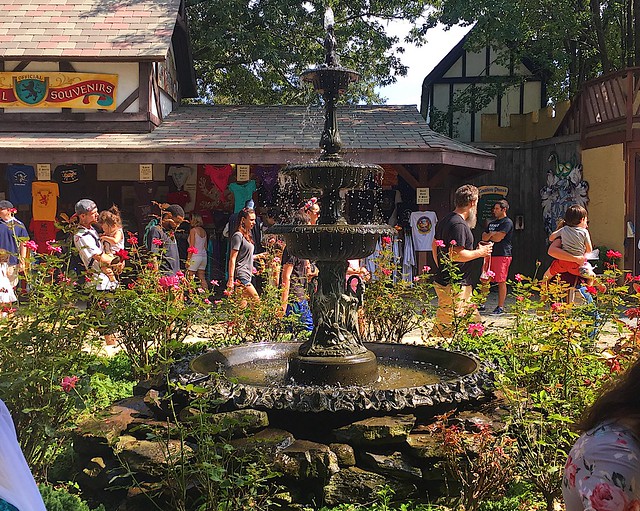 This year, we decided to go on opening day to see the King approach, the village gates open, and the cannons sound. They’re not kidding when they say to cover your ears! Immediately inside the gates is the fountain and the Gatehouse Stage, where you can learn about the plot of the year when they present the Royal Welcome every morning. This year’s plot involves King Henry’s desire to divorce Queen Katharine of Aragon in order to marry Anne Boleyn. They brought back an Anne Boleyn storyline last year for the first time in years, and it seems they’re sticking with it for a while. Of course, both the other courtiers and the common folk have their own dramas outside of the Royal family. The whole thing makes a complex tapestry of performance and history, which would be impossible to catch with even just one day’s visit to the faire.

That said, one of my favorite parts of faire was also one of my first stops of the morning: Scotch Eggs! I love this supremely unhealthy faire staple that takes a boiled egg, wraps it in sausage, and deep fries it to perfection. I managed to show up the first time just as they’d run out, but that meant that when I came back ten minute later, I got a fresh-out-of-the-fryer Scotch egg. Yum. I offset the Scotch egg with a fresh pressed beet-carrot-apple-ginger juice from the adorable juice vendors. 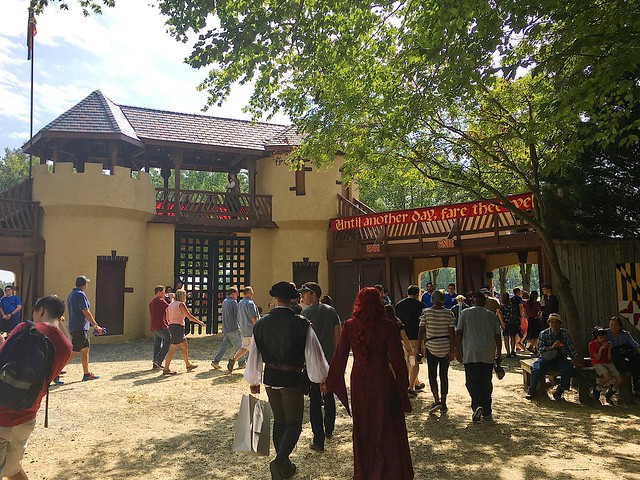 From there, it was time to wander. We met up with friends, saw a couple shows, and did some shopping. Oh, the shopping. Despite having attended faire since I was in high school, I’ve never actually had my own proper Renaissance Festival garb before. I always put something together that looked suitably “Renaissance” out of my closet, usually just involving a long skirt and some layered tops and jewelry. But I wanted to go legit, so one of our stops was to Moresca, where I got a cropped corest top, a flowy split blouse, and some harem pants to make the perfect warm-weather outfit for a day at the faire. And of course this means that I have to come back this season to get more use out of it! I also managed to find a new matcha bowl at a pottery vendor, which will definitely be getting some Instagram time this week.

After a day of shopping, walking, mingling, and eating, Mr. Tweed and I were pretty exhausted, so we decided to head home after about five hours at the faire. But the nice thing about faire is that whenever you leave, it’s always going to be a temporary parting!