I’m back again! I’ve resolved to try to post at least once a week for a while. And I thought, since I’m still recovering after my own personal hardship, I would offer something a bit more uplifting: A “Tea and a Story” post about natural disasters!

Seriously though, I have always been fascinated by the prevalence of flood stories across cultures. Whether this is some primordial memory of a great global flood, or simply a disaster that a lot of locations have in common, stories about the floods are always stories of renewal and transition. So that’s how stories about natural disasters and the near-elimination of humans as a whole count as uplifting.

Of course, the story that those of us in the Christian world grew up with was the story of Noah and his ark. In that story, God (the god of the Abrahamic religions) decides that human beings are too wicked and he’s going to destroy them all in a flood. All except for Noah, who “found grace in the eyes of the Lord.” So God instructs Noah to build an ark and take a mating pair of every animal and his family and ride out the flood. Eventually, the flood waters recede enough that the ark comes to rest on the top of a mountain and Noah sends out birds to see if the waters have receded, with the final sign of land being the dove returning with an olive leaf.

The most fascinating thing about this story, to me, is that is is actually incredibly similar to an ancient Babylonian story, one version of which is recorded in the Epic of Gilgamesh, even down to the birds and the fact that the Hebrew Bible uses a similar word for “pitch” to the original Babylonian story. It’s widely accepted that the Noah story is actually based on the older story from Babylonian mythology.

The most famous version of the Babylonian myth is actually the one from Gilgamesh. In the story, Gilgamesh meets Utnapishtim, who is the survivor of this ancient great flood. Utnapishtim recounts his experience of the great flood. In it, the gods decide to destroy humanity, but because the god of wisdom, Ea, likes Utnapishtim, he finds a way to tell the man about the impending flood and instruct him on how to build an ark and save his life and the lives of his family members, along with animals, craftsmen, and grains. After riding out the flood, he comes to rest on a mountain, and like Noah, sends out birds to check if the waters have receded. First he sends out a dove, which returns because it has found nowhere to alight, then a swallow, which also returns. Finally, he sends out a raven, which finds dry land and doesn’t return. After that, he sets everyone free and sacrifices to the gods. After discovering that a mortal survived, the gods discover Ea’s betrayal and are angry, but ultimately decide to bestow immortality upon Utnapishtim and his wife and have them live far away from humanity.

Of course, this isn’t the only flood narrative. My favorite of the narratives comes from Greek mythology and is the story of Deucalion, the son of Prometheus. Once again, Zeus decides that humans have become too wicked. This may or may not have something to do with the woman bearing a jar full of evils that he sent down in a fit of pique after Prometheus not only steals fire, but also teaches men how to cheat the gods when choosing sacrifices. But never mind that. Ultimately, Zeus decides to drown everyone in a great flood. Prometheus tells his son, Deucalion, how to save himself and his wife, Pyrrha, by building a “chest” and provisioning it (in this story, there’s no mention of saving animals, so presumably ancient Greek animals were all strong swimmers) to ride out the deluge.

Once the flood recedes, Deucalion and Pyrrha make a sacrifice and ask the goddess Themis (or Zeus, depending on the story) how to repopulate the earth. They are told to cover their heads and cast behind them the stones of their mother. Naturally, good Greeks that they are, they’re aghast at such desecration of an ancestor. But eventually, they figure out that the “mother” Themis means is the great mother of all life, Gaia, and her bones are stones. So they cover their heads and cast stones behind them. The stones that Deucalion throws become men and the stones Pyrrha throws become women.

I liked this myth growing up for two reasons: one, I loved Greek mythology and for some reason I found it easier to swallow a capricious god like Zeus because his overall characterization is not an omnipotent, infallible deity; and two, I liked the detail at the end of repopulating the earth from the original creative matter of life, Gaia (plus, as I got older, I realized it helped do away with some of the weird, incestuous overtones of stories that just have a family do all the repopulating). But now, the most striking part of this set of stories is how the stories that include a pantheon of gods include some dissent, whereas the Judeo-Christian story has god make a decision and then second-guess himself by finding someone he wants to save. Instances like these in the Bible intrigue me because they show the complex nature of God and suggest that he is perhaps an amalgamation of past pantheons.

Theological discussions aside, it’s interesting that the idea of a great, world-ending flood has persisted throughout so many cultures’ folklores. Stories of great floods exist in stories from the Americas, Asia, Africa, Europe and the Oceanic islands, and are generally among the oldest stories from those traditions. Whether this is because of some collectively remembered event in prehistoric times, or for thematic reasons, something about this story seems to speak to all of us, as humans. Water is an interesting thing in human history, as it is both vital for life and extremely dangerous. The idea of a hero triumphing over the elements itself is kind of an analogy for much of human existence in general.

So that’s my discussion of uplifting, hopeful floods. I find these stories fascinating and would love to hear about any of your favorite folk tales of great floods.

So I mentioned a few months ago that when I first found out I was pregnant, my first sign that something was up was that my skin freaked out. Now, so much skincare advice for pregnant women suggests using “mineral” sunscreen filters instead of organic “chemical” filters for various reasons, of varying levels of validity. But the primary reason I decided was because of the increased risk of skin sensitivity. And when my skin broke out in a rash, I decided to go to only inorganic filters (i.e., zinc oxide or titanium dioxide). But inorganic filters come with drawbacks: a thick feel, white cast, etc.

So anyway, I started looking for inorganic sunscreens. There are plenty of recommendations out there. In fact, one of my favorite YouTubers, Renee at Gothamista, did a video about her favorite ones recently. And they’re also pretty easy to find at the store where we shop. After a few months of trial and error, I thought I’d share some of the formulations that I found myself reaching for over and over again.

Now, one of the main issues I’ve had with inorganic sunscreens is that the formulations are not usually very cosmetically elegant. A lot of companies that make them focus on “natural” ingredient standards, which means they use a lot of plant oils and butters, leading to a thick product. Ironically, because the inorganic filters ingredients themselves are white powders, they can also make a product drying or mattifying. So plenty of the products I tried were too thick or too drying or both. And some products were great in the summer but to dry for winter. I’ve put together some of my favorites for both situations. 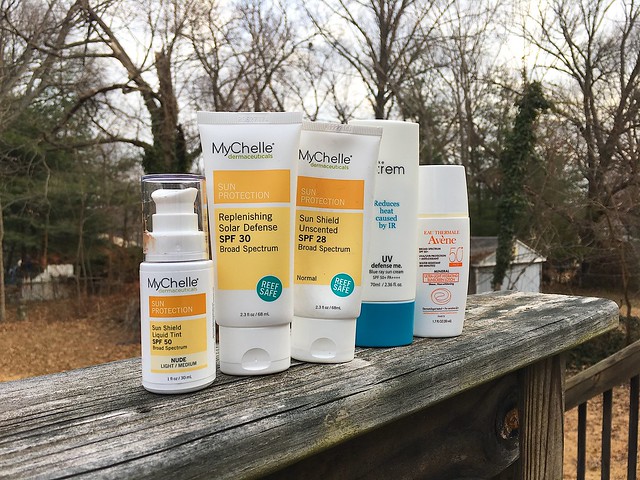 Avene Mineral Ultra-light Hydrating Sunscreen Lotion: This was the first suggestion from Renee that I tried. And, wow, is it hydrating. Unfortunately, this was a bit too much for me in the summer when I first tried it, but I found it was great for the weekend when we went up to the Pocanos for the weekend in the early fall. It does leave a bit of white residue, but it’s great for lazy days. Just cleanse and slap it on. So this isn’t my favorite, but I do use it regularly.

Mychelle Unscented Sun Shield: This is one I used frequently when I still sought out natural skin care products. It’s thick and white, but still manages to dry down to a nice texture. It does leave a little white residue in my eyebrows. And it’s dry in the winter. But for summer? Love it.

Mychelle Sun Shield Liquid Tint: This was an impulse buy at the natural foods store, but I still use it every week. It’s tinted, but sheer enough that I can use a lot of it without looking like a mask. It just gives a little light coverage. This pretty much stays in my gym bag and I use it as a one-step sunscreen and makeup step when I’m rushing to get ready after barre class.

Make P:rem Blue Ray Sun Cream: This is an interesting one. I don’t love this sunscreen, but I love the fact that I get only minimal white residue around my eyebrows even though it has SPF50. It’s a bit dry of a finish for winter, but I can see myself reaching for it more when the weather warms up.

Mychelle Replenishing Solar Defense: And this is my current favorite. It’s lightweight, spreads easily, doesn’t leave a white cast on my skin, and feels lightly moisturizing (over a serum and cream, but hey, the East Coast has been going through some rough weather). I hope this will still work in the summer with fewer moisturizing layers underneath, but even if it doesn’t, it’s a great winter sunscreen for me.

So that’s my roundup. If anyone has any other suggestions, let me know in the comments.