I finished my first proper sewing project from a pattern this weekend! I’ve been sharing some little updates along the way as I work on this lovely skirt, but I thought I ought to write a longer post detailing my process, how I deviated from the original pattern, and lessons I’ve learned along the way. Perhaps others who might be interested in sewing this pattern, but who don’t have a sewing machine, might be interested in my thoughts. 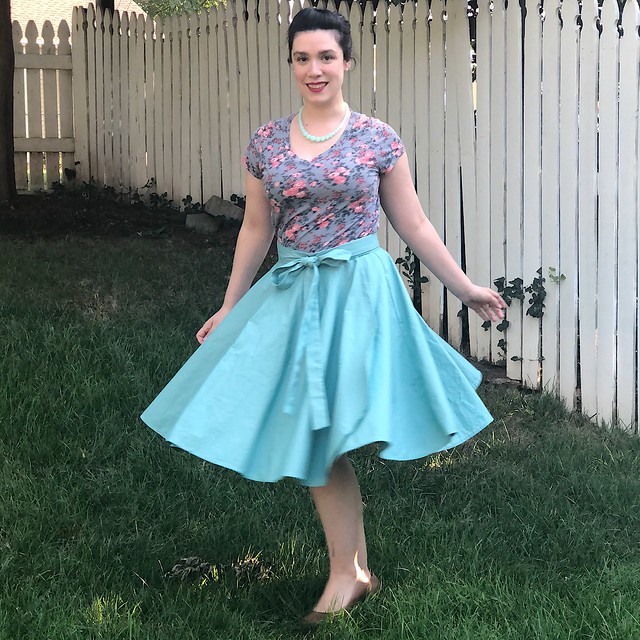 So first of all, I chose this skirt because 1.) the pattern is free, 2.) it’s a wrap skirt so sizing is very forgiving, and 3.) I know Kirsten, who owns L+J. Also, I’ve been spending a lot of my time exploring sewing YouTube videos and it’s inspiring me to sew, plus I enjoyed the embroidery project I picked up recently. I find the physical act of stitching to be very relaxing. But my one experience with a sewing machine, when I tried to “help” my mother with my Halloween costume one year, went poorly and I don’t really have a good place to put a machine right now anyway. So I decided to see if I could hand-sew the entire thing. Yes, I’m a little mad. But we’re all mad here, so here we go.

I chose a medium-weight, quilting cotton from Fabric.com because it was inexpensive, solid colored, and machine washable. I didn’t want to break the bank with my first project because there was always a chance I’d fail utterly and have to scrap it, but I wanted something in a color I would wear, and solid so I could pair it with more tops. I also chose some all-cotton green thread.

Of course, when the fabric and thread arrived, I discovered the pitfalls of shopping online, namely that the colors don’t match as well as I’d have liked. But they match well enough and the very little stitching that is visible on the outside of the garment isn’t too jarring. When my fabric arrived, I washed and dried it, and then got ready to go!

So from the day I cut out the pattern until the day I tied off the last stitch, it was exactly a month to make this skirt. I did sit on the fabric for a little while because it arrived while we were in the process of moving house, and for a while I didn’t really have any space to lay out fabric. But after the initial move finished, I found myself with the time. But I will say that I only worked on the skirt maybe two days per week because I have a full-time job, a baby, and family and friends who insist on claiming some of my time on the weekend. If I had worked on it for a few hours every day, I might have been able to finish in a week or two. One day, perhaps I will take off a week from work to test this theory.

The biggest time sink was the hem. It’s a circle and then some, so that’s understandable. And I chose not to do the topstitching on the waistband and ties to save some time. Surprisingly, I found the side seams to be relatively quick. I actually cut the back panel of the skirt on a fold to save myself a seam, but in retrospect, one more seam wouldn’t have been that much work, and it would have been nice to have that center back seam to line up the waistband.

When I first started out, I was inordinately grateful for this video from Bernadette Banner on the basic stitches for historical hand-sewing. I found that going to historical practice blogs and YouTube channels was really helpful because they’re the ones using hand sewing to construct garments, rather than just for finishing or decorative work. I also appreciated this page on hand-finishing stitches. I used her Frenched seam finish on my side seams, rather than sewing each seam twice like you would on a machine.

I did my side seams in backstitch, finished the seams with a whip stitch, and felled the hem. I backstitched on the waistband, twice (my pride and joy is the inside waistband seam, which I backstitched without pricking through to the front), and used a slip stitch to close up the rest of the waist ties. As mentioned before, I skipped topstitching the waist band and ties. Those are the only deviations from the printed pattern.

So that’s my skirt process. It’s delightfully twirly and I’m thoroughly enjoying wearing it. Of course I welcome any questions you might have for me! Let me know if you have any sewing projects you’re working on, as I’m definitely planning my next project.