As I mentioned in my “Tea with Jane Austen” video this weekend, one of Austen’s favorite treats was the Bath bun, an enriched, brioche-like bun that has been referenced since at least 1763. Austen wrote in her letters of “disordering [her] stomach” with them. So as part of my video, I wanted to try to recreate them. 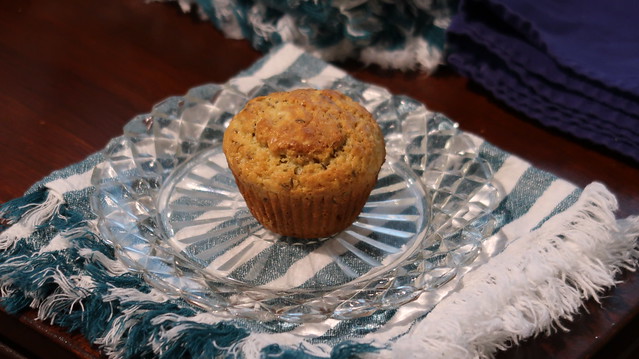 I’ve been able to find many 18th- and 19th-century cookbooks freely available on Google Books, and it’s not only been a boon to my historical series, but also just great fun. So I looked through a book from 1805 called The Housekeeper’s Instructor by W. A. Henderson and I found this recipe for “Bath Cakes or Buns”:

“TAKE a half pound of butter, and one pound of flour; rub the butter well into the flour; add five eggs, and a teacup full of yeast. Set the whole well mixed up before the fire to rise; when sufficiently rose add a quarter of a pound of find powder sugar, an ounce of carraways well mixed in, then roll them out in little cakes and bake them on tins; they may be eat for either breakfast or tea.”

It seemed straightforward enough, and because much of the recipe is given in weight, there was little confusion as to how much of things to use. The one confusion was the “teacup full of yeast.” Of course, it was not calling for a cup of dry powdered yeast, as we use now, but likely meant a cup full of the liquid yeast slurry known as “barm.” James Townsend has a great video about yeast, in which he gives a recipe for an approximate substitute from the barm that would have been used (jump to 3:40 for that). Barm was a by-product of beer brewing and using it in bread-making allowed for the production of sweeter breads, rather than the sourdoughs that would have been produced before. For our sweet Bath buns, “yeast” likely meant barm, which also accounts for the lack of liquid in the dough, apart from the eggs.

As this was considered a relative of modern brioche, which is a milk-based dough, I decided that instead of making barm with beer and yeast, I would simply replace the “yeast” in the recipe with a packet of dry yeast activated in some warm milk. So I warmed a cup of milk, added the yeast, let it sit for 15-20 minutes and then proceeded with the rest of the recipe.

And I was left with an incredibly loose batter, rather than a dough! I ended up having to add much more flour to make it into a dough, which threw off the ratios of the sugar and butter as well. So it seemed the recipe required more sleuthing.

The first thing I realized is that I didn’t actually know how big a “teacup” was in early 19th-century cooking. I simply assumed it meant a cup, but looking at most of my teacups, that seems a rather poor assumption. So I found this list of somewhat obscure cooking measures, which helped. It turns out a teacup is the same as a gill and is equal to two wineglasses (or a half a cup, in modern terms).

Next, I looked at my eggs. I use standard large eggs in my baking, and most recipe I find these days call for large eggs, but in the past, eggs would have been smaller. So I hunted around for references and found that 19th-century chickens probably produced eggs that today would be considered small-to-medium. Now, rather than buy different eggs, I looked up conversions and five small or medium eggs is about four large eggs.

Thus armed with new knowledge, I took up my recipe again. This time, I produced a very loose, sticky dough, but it was cohesive enough to be picked up and formed roughly into blobs, which I baked in a muffin tin. They look a bit like muffins, but inside, they have a fine-crumbed, enriched bread texture, with a lovely sweetness and a good flavor from the caraway seeds. I can see why the caraway seeds fell out of favor in modern incarnations, but I rather like that old-fashioned flavor. They are, indeed, lovely for breakfast or tea, especially slathered with a good bit of soft butter.

A note on the amounts: I kept the ingredients by weight and I mixed the dough by weight, except where specified otherwise in the original recipe, so I don’t know how much I used by volume. I highly recommend you get a kitchen scale for baking, but there are a few sources online of the approximate conversion of weight to volume for each ingredient. Remember that a pound of flour and a pound of sugar will be different volumes, so you will need to look up each separately.