Last year, I decided to take a commercial DNA test out of an idle curiosity about my ancestry. I was pregnant and thinking a lot more about family roots and traditions. The results were interesting, though not entirely surprising — mostly British with a little German and Eastern European mixed in — but I was intrigued by the level of Scandinavian ancestry. So this year, I decided to work on exploring my genealogy. And in honor of my efforts, my mother decided to add to my tea cup collection with this cup from Herend Hungary, as a relatively recent part of my heritage is from Hungary. 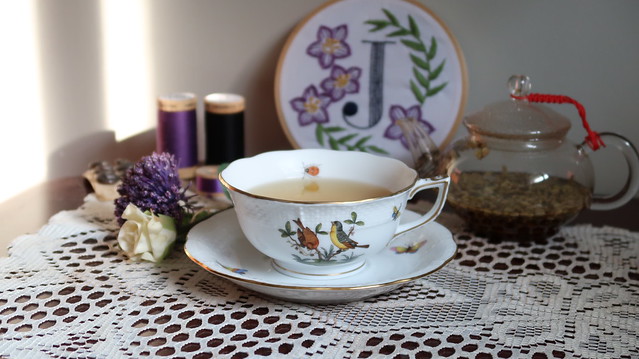 Now, I want to pause here and acknowledge two things. The first is that I’m extraordinarily privileged to be able to find records of my ancestors coming over to the States from their birth countries. Not everyone has this luxury, as not all crossings were recorded with details of all travelers’ names, given that not all crossings were by choice. The second is that I fully acknowledge that I am in the grips of an American’s desire to be seen as not American, but somehow connected to my “culture of origin.” I know this is often viewed with amusement by others, and I can see that. But, given that some of my non-American heritage is rather recent, there are still traditions that play into my modern life from some of them. So I wanted to explore it. Plus, a haughty relative once determined that our family is qualified to join the Daughters of the American Revolution, and I was intrigued by that, given what I knew of our more recent immigrant history.

But on to my discoveries. The first is that one of my most recent immigrant ancestors came over in the 20th century, from Yorkshire, England. I had always assumed that my Catholic grandparents were of Irish descent, but it was fascinating to learn something that happened to correspond with my interest in Tudor-era history, given that Yorkshire was a pocket of Catholic recusancy during the Reformation of the English church. I also had ancestors on another side of the family from Derbyshire. And I was already aware of the relatives that emigrated from Hungary in the early 20th century. Interestingly, while my ancestors would now be considered to be from Hungary and Romania, when they were born, the whole of their birthplaces would have been part of the Kingdom of Hungary. It was particularly interesting to see the variations on names as records sprouted spelling errors and the like.

And on the other side, I was able to trace all the lines of the family back to their original crossing and found that the Revolutionary heroes largely traced their origins back to colonies that were founded by Dutch settlers. In fact, one ancestor came over shortly after the original founding of New Amsterdam. Still another line traces back to Denmark. So far, I’ve been able to find three different ancestors who found in the American Revolution, two of whom survived, not including the ancestor claimed by my great grandfather’s stepmother, whose records helped launch my own research.

So this has been a fun project. I’m not entirely sure what to do with it. I suppose I should find a way to make a hard copy to store and pass on to Elliot so he does not have to do the same work, should he be so inclined. I used Ancestry.com for most of the research, which does charge a membership fee to actively look at records, and charges additional to look at international records (hence, only tracing ancestors back as far as their original crossings to the States), but the interface is nice, and you can view your tree for free. Perhaps in the future, I will return to it to collect it into a genalogy book, to go with the book my father-in-law made for my husband’s family.

4 thoughts on “Finding My Roots”