This Tuesday’s tasting is a tea I found in my tea cupboard that I cannot link to because I don’t know precisely which tea it is! I know it came from Yunnan Sourcing, in my oolong tea subscription box, and was from Autumn 2018, but beyond that, I have only what I can glean from my eyes, nose, and tongue because I accidentally cut off most of the label when I opened the packet. 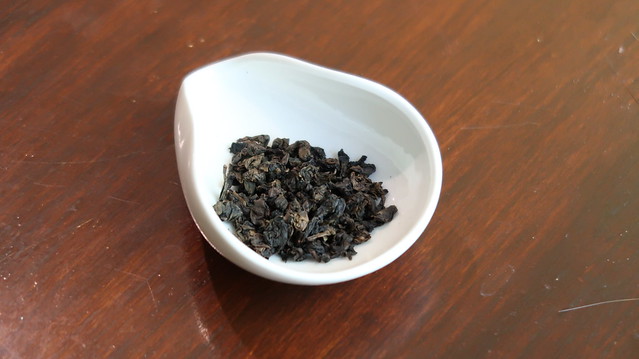 You can see that it is a rolled oolong that has a bit of roast and oxidation on it. The leaves are obviously rolled, but super tightly like some oolongs. I used 5g in a 120-ml gaiwan and steeped it at 190F. I rinsed and then steeped, starting with 15 seconds and increased each steeping by five seconds (except for the seventh and the ninth).

From the dry leaf, I got aromas of pipe tobacco, roasted nuts, and a faint bit of woodsmoke. After the rinse, the wet leaf smelled creamy, with notes of caramel and leather, and just a little cannabis. After the first steeping, the lid of the gaiwan smelled of toasted hazelnuts while the wet leaf smelled of spent firewood. The liquor was a medium amber-gold color and smelled of tobacco. It had a creamy mouthfeel with flavors of browned butter and a maple syrup aftertaste. The empty cup had the aroma of vanilla and wood. 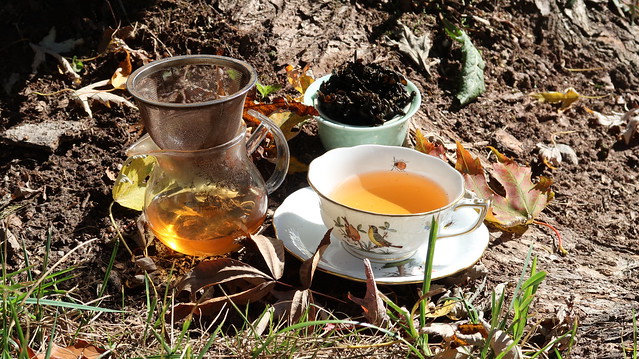 The second steeping gave a slightly richer color liquor that had more roasted aromas coming through. The lid and leaf both smelled of charcoal while the liquor still smelled of tobacco. The flavor had a bit more tartness or tannin with a bit of mineral dryness and a sweet finish. The mouthfeel was custardy and I got sandalwood on the finish. The third steeping had more sweetness still, with the same roasted and tobacco aromas.

On the fourth steeping, I noticed a cedar smoke aroma. The flavors were much lighter and I noticed I was feeling some body warmth. By the fifth steeping, the aroma seemed to be fading, along with the flavor, but I still noticed a biscuit flavor and a very smooth finish. The sixth steeping brought out charred flavors: charred meat on the aroma and a charred oak flavor, like a whisky. The seventh steeping I actually only steeped for maybe 20 seconds because I forgot to wait for it to steep before straining it. I got more of a meaty flavor, almost like a stew from this steeping.

By the eighth steeping, it seemed pretty done, though I still got that characteristic tobacco aroma, so I did a ninth and final steeping for 90 seconds, which gave the last bits of a smoky, meaty aroma and left me feeling a bit jittery.

Oddly enough, the spent leaf was a deep green color, not brown like the dry leaf and roast would suggest. It was the color of pickled grape leaves. They were still quite shriveled and upon inspecting them closer, there were no fully intact leaves. A final sniff of the leaves brought out aromas of spinach or kale and a light marine aroma.

Perhaps in the future, I would be able to actually identify a tea from such a tasting. Any guesses?