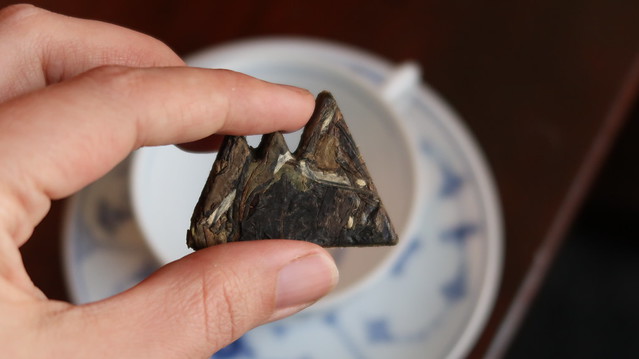 I tasted this tea in my recent video, but since then, I’ve read others’ tasting notes and determined that I got some very different flavors from this one. So I decided to sit down and do a proper tasting, with my own house filtered water and after cleaning my tea ware with some baking soda to make sure there weren’t any old off flavors affecting things. The 2016 Little Mountains are a compressed Shou Mei white tea that I originally received in my anniversary sale order, but that I have since bought more just because I enjoyed them. I’m tasting it in my silver teapot because I tend to enjoy aged white teas more when I’m drinking them out of silver.

The first steeping, I let this go for a minute, as per Bitterleaf’s suggestion. The liquor was the color of Tokaji wine, a lovely mellow gold. The wet leaf had aromas of fresh, sweet alfalfa, though the liquor itself did not have a lot of aroma. The mouthfeel was thick — syrupy, but not oily — and I got a slightly fruity tartness from the liquor, kind of like a very fresh apricot that isn’t overly ripe. The aftertaste was caramel. Despite this sweetness, I still felt like the tea had an umami quality, almost like it feels sweet more than it actually tastes sweet.

The second steeping was for thirty seconds, and yielded a similarly-colored liquor with a similar leaf aroma as the first, though the liquor had taken on a honey aroma. The mouthfeel was smooth and lubricating, with flavors of almond blossom honey. The third steeping was also for thirty seconds, after which the leaf smelled of honey and fresh hay and the liquor was slightly darker and had the same syrupy texture. The flavor had gotten sweeter, with a flavor similar to chamomile. The fourth steeping, I bumped the time up to forty seconds and got a darker amber-gold liquor with a slightly smoky and herbal aroma from the leaves. It still had the same honey-sweetness. 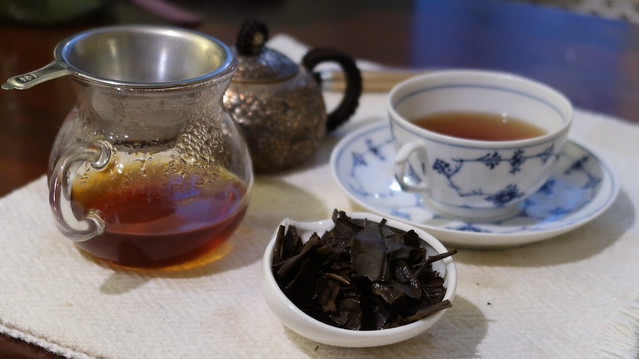 The fifth and sixth steepings were for forty-five seconds each and held steady in flavor and aroma. I went up on one minute for the seventh steeping and two minutes for the eighth steeping. By then, I felt like I once again was tasting alliums, perhaps some caramelized onion or leek. After that, I decided to finish by boiling the leaves in a cup of water for about ten minutes. This yielded a very dark infusion with a reddish-brown liquor and a strong flavor that had a bit of bite in the back of my throat. I would probably be less aggressive in the final boil, but all in all, I definitely get more of the sweetness that others have found, so perhaps it didn’t play well with the tap water in the Philadelphia suburbs. If anyone is in the Philly area and has tried this with their tap water, did you get honey or onion soup?