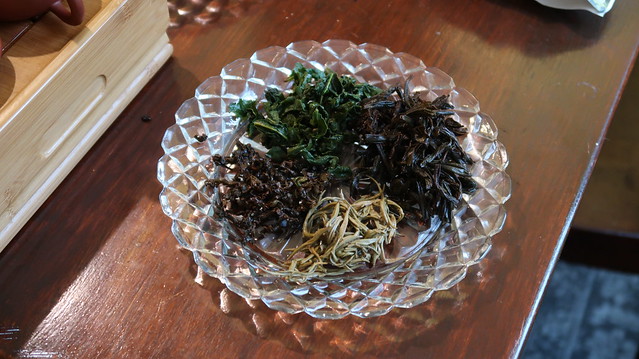 Building on last week’s post about how I’ve decided to take steps to learn the medicinal use of plants in a more formal way, I thought I’d talk a little about how I view the supposed health benefits of tea (that is, C. sinensis). Now, much has been said, particularly in the Western press about tea as some sort of miracle elixir that is supposed to promote weight loss, improve your skin, fight cancer, and reduce inflammation in the body. And recently, my mother (who was the first tea-lover in my life, but who largely drinks black tea) came to me with a request: can I suggest some white and oolong teas that she might like because they are supposed to be good for her.

So I invited my mother over to introduce her to some teas, both those that I thought she would enjoy, and those that were just a relatively good representation of what can be easily found in each style. We chatted a bit about tea, how to brew it, what kind of things made different teas different, and a bit about the reason she decided to try to drink teas (other than black tea, which for some reason is largely exempt from the health sensationalism). Of course, the darling of the popular press is green tea, but my mother categorically does not like green tea. I’m sure I could find one that she enjoys, but I didn’t want to push her, so I respected the request for oolong and white teas only. I sent her home with a few packets of oolong teas that she enjoyed (include my newly-beloved yancha), and hopefully a new motivation to expand her tea horizons.

The one thing I will say is that I am not here to talk about the validity of health claims about tea. If you read my contact information, you’ll find that I am not willing to work with companies that make overblown health claims or that promote weight loss or detox teas. That’s just not what I’m about with tea. But I think it is important to keep concepts of healthfulness in mind as context when exploring teas because tea was originally used (as were most plant-based beverages) as a medicine. The apocryphal story of the discovery of tea has the (likely mythical) emperor Shennong fortuitously tasting leaves that fell into his boiled water and finding out that it was an antidote to poisons he was testing. So acting like tea is purely a pleasure beverage, with no reason to consider any medicinal use, is also not quite right.

When I was pregnant, I had a really hard time determining if it was safe for me to drink tea. I’ve written about my research at length in a previous post, but suffice to say, I found a disconnect between research that lumped tea in with other caffeinated vices, like coffee, and research that treated tea like an everyday, innocuous-or-healthy beverage. The research that reduced it to “tea is for caffeine and caffeine is bad” tended to come from Western researchers, while researchers from Japan and China tended to focus more on the specific constituents of tea. In fact, if I hadn’t specifically looked up tea research from Japan, I wouldn’t have found information suggesting that the real worry about tea is not the caffeine, but the fact that other constituents can impede vitamin absorption! It was important to look at these drinks in a cultural context, particularly because in the case of pregnancy, there is a strong drive to demonize things and instruct pregnant women to avoid, well, everything.

So where does that leave me in the “is tea healthy?” debate? Honestly, tea, for me, is likely healthier than coffee because I’ve found that coffee causes me, personally, to have issues. But in that same vein, I’ve found that certain teas are more likely to affect me adversely than others. I think it’s important for each tea lover to do their own research, but that ultimately, the important thing is that you enjoy your tea, and don’t simply suffer through it for some particular health benefit that may or may not have been properly tested. I think tea is wonderful, and I understand the impulse to tout all the positive press I can find about my favorite beverage, but I think drinking tea solely for health benefits is rather missing the point. So when I set out to introduce my mother to oolongs teas, my goal was to find a tea within that style that she enjoyed, not to introduce her to the healthiest version of that tea. And I hope you, dear readers, will also choose your teas based not only on their purported health benefits, but also for the joy it gives you, because joy is a healthy thing, too.

NB: I am not a health professional and none of this should be considered medical advice. Please do your own research and come to your own conclusions (which can include consulting your own doctor).

2 thoughts on “On the Health Benefits of Tea”