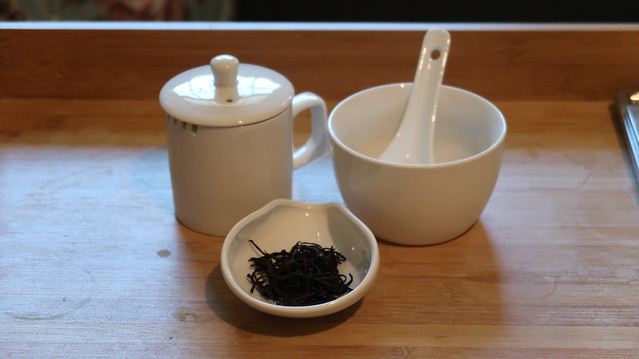 I ordered a few teas from Floating Leaves Tea a little while ago, but I’ve been remiss in showing them the love they deserve. So, to remedy this, I decided to do a tasting of the Ruby 18 black tea this week. I’ve also started exploring tea cupping using a cupping set I got from Camellia Sinensis (or, if you want a US-based store, Art of Tea has a similar one*). I’m still learning the ropes of tasting in this style of brewing vessel, so I played around a bit. I suppose I might want to take an actual course in tea cupping, but that’s not really my style, so for now, I’m experimenting.

The first steeping was for two minutes, after which, I got sweet aromas, almost like the glue on the back of old postage stamps, from the leaves. I know this sounds like an odd note, but it’s actually a very positive and comforting aroma for me because it reminds me of helping my mother at the office on snow days when my school was closed. The liquor was a rich mahogany brown color and really exemplifies why the Chinese refer to this kind of tea as “red tea” rather than “black tea,” as the West calls it. The liquor had a light fruity and smoky aroma. The body was medium-rich and had a lightly syrupy mouthfeel, with a hint of dryness afterwards. There was a light, smooth tannic flavor, followed by caramelized onion and dark stone fruit. This developed into a sweet-acidic flavor that reminded me of dried tart cherries and amaretto.

The second steeping, I went for two and a half minutes. The wet leaves smelled of caramel and wood. The liquor was slightly lighter in color, with a sweet smell that I couldn’t quite put my finger on, like some sort of sweet-smelling herb. The mouthfeel was richer and juicier with no dryness. The flavor had a sweet cereal taste, like barley syrup or toasted soybean powder with brown sugar. I still get stamp glue from the flavor. The cup aroma after finishing the liquor was pure caramelized sugar, and I noted that I was starting to sweat. 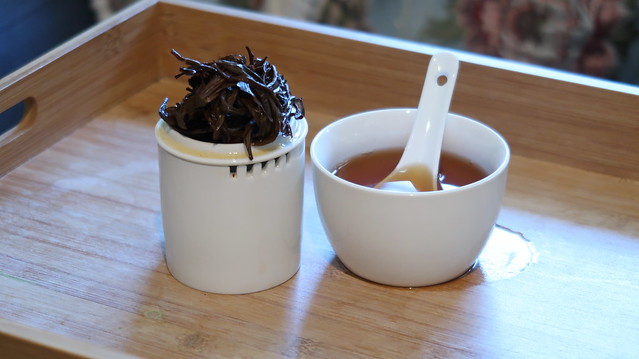 The third steeping was for three minutes, after which I got aromas of wet paper from the leaves. The liquor was a similar color to the second steeping, with a faint sandalwood aroma. The mouthfeel is the same round, rich feel, but there is an acidic note, almost like a tomatillo, on the taste. The liquor was starting to taste a bit papery, which is often a sign that the tea is about finished. The fourth steeping, for three and a half minutes, was the last. The liquor was lighter — a dark apricot color — and the leaf aroma was exhausted. Only the acidic notes seemed left to the flavor with a bit of woodiness. 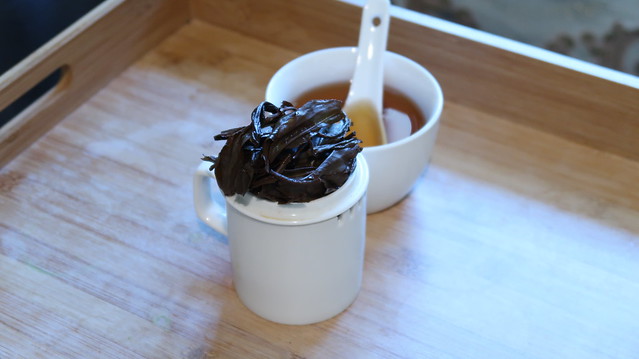 The spent leaves were surprisingly large. I actually took a photo after the second steeping, but was surprised by how much more they expanded over the next two steepings, so I had to photograph it again. I’m definitely going to have to explore more Taiwanese red tea cultivars.