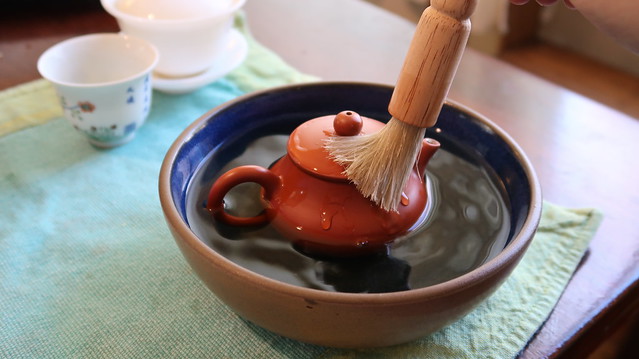 As I mentioned on Tuesday, I treated myself to an inexpensive Yixing pot the last time I was at Ching Ching Cha. While this wasn’t my first foray into traditional, unglazed Chinese clay, it was the first time I really made any kind of effort to “open” or “season” the pot, so I thought I’d share a little bit about my trial and error process.

My first clay pot, a Da Hong Pao Chaozhou pot from Bitterleaf Teas was specifically purchased for my Yuan Mei video, so I decided to dedicate it to yancha. This one, I was a bit more vague about, but I had the idea to use it for lighter Taiwanese oolongs. I tried it with some Eastern Beauty teas I had and was unimpressed, so I tried seasoning it by soaking it in tea. I was still unimpressed with the performance, so I tried a different tea. I tried a lightly roasted Cui Feng oolong from Wang Family Tea and was much more impressed. Sadly, I ran out of that tea pretty quickly, but I still had some of their medium-roasted Bagua Shan honey scent oolong, and had recently reordered a larger amount of that, so I tried that and also found it enjoyable. So I decided to continue my seasoning with that.

So on to my “process.” Before using the pot for the first time, I rinsed it well with warm water, and then brought a pot of water to a boil, dropped the heat, and placed the teapot in a ladle in the water (to keep it out of direct contact with the bottom of the pan) and let it sit in simmering water for about twenty minutes. Then I made some tea in it, found it lacking, so I used those leaves to steep a large pot of tea in a glass pot and poured that into the pot leaving it until it cooled. When I decided to switch to the honey-scent oolong, I decided I would give it a more proactive tea bath, so I brewed my tea with the pot in a bowl, simply pouring the brewed tea into the bowl each time. Then, I removed the leaves from the pot, filled it with brewed tea, and used a brush to wash the top of the pot with tea. I let this, again, sit until it was cool, and then emptied the pot and let it dry.

It’s been a rather slap-dash production, with me largely learning as  I go. I think if I had it to do over, I wouldn’t have even made any evaluation about what kind of tea I wanted to use it for. Once I started brewing oolong in the pot, I felt like I couldn’t fully switch streams, and it’s entirely possible that this pot would prefer to be brewing something else. That said, I mostly drink oolong, so if it wanted to drink something else, it would either be disappointed or neglected, so I chose the former. One thing I have learned is that Yixing enthusiasts referring to their pots like they are living things with preferences is not just an affectation.

So I look forward to more experimentation and getting to know this little pot. And hopefully this is not the beginning of a new collecting habit.

NB: Nothing to disclose.

One thought on “On Opening an Yixing Pot”

I hope my friends in Texas are staying safe and warm. The ice and sleet got to us this morning, so I’ll be bundled up with a Cuddly Cuppa from @twigandfeathershop today. It smells like mulled cider and tastes like a hug in a cup.
How about a tea video as a Valentine’s Day treat? Today I’m exploring a tea session inspired by a certain unexpected ghost from Over the Garden Wall. Watch it at the link in my profile.
Have you ever tried Earl Grey with lime instead of lemon? My mother gifted us a bag of limes that she got delivered by mistake and I’ve been trying to use them, so I slipped a slice into my morning Earl Grey and it’s delicious! The slightly floral, butter sharpness of the lime goes beautifully with my favorite @rareteacompany Rare Earl Grey (which I’m currently rationing because it’s running very low!).
Prepping for a little sheng session with a mini Dangerfield from @white2tea
Just another matcha Monday...
Does anyone else love watching their Yixing emerge from a cloud of steam after filling and warming it?
%d bloggers like this: