This evening, I am looking forward to the opening of a truly special theater project to me. For the past three months, I’ve been working on the role of Eliza Doolittle in Pygmalion, a role made all the more special by the fact that I will likely be taking a break from stage acting for a while after closing, and the fact that the director is a dear friend of mine and one of the first directors I ever worked with when I started acting again in this area. 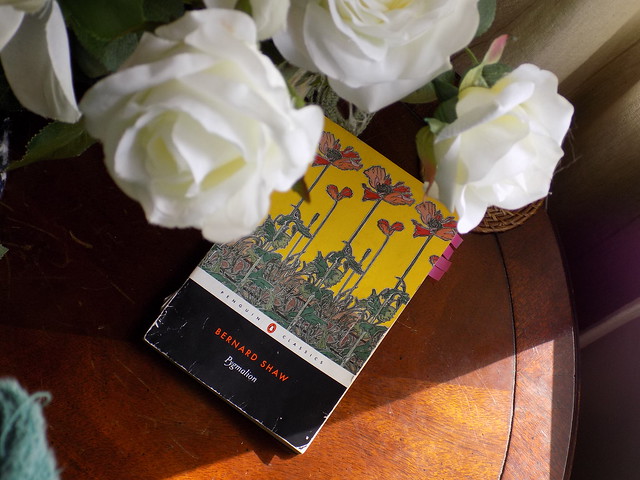 Eliza is also just a fantastic role in a classic play. She’s an early feminist figure, but from a time when feminism often just meant you didn’t beat your wife. Shaw uses the play to not only make some pretty strong feminist statements, but also to dissect the conflict among the classes in early 20th-century London. Eliza’s father, Alfred Doolittle, is actually my favorite character because he has these extended and eloquent speeches about the plight of the working man, not only because of his poverty, but how he must live up to middle-class ideals in order to get any help from his “betters.” The interplay between the poor characters and the wealthier characters, as well as between the lower- and upper- class characters paint a complex picture of social struggle at all levels. In fact, the play is rather skillful at illustrating the concept of privilege and how it can prevent a person from seeing the real harm they might be doing to another.

But apart from social commentary, Eliza is a character who both has to grow as a person, changing her speech and demeanor, as well as maintain a spark of defiance that led her to Higgins and his lessons in the first place. The first part is work. The second part is difficult.

The first part starts with the fact that, apart from Higgins, Eliza has the most lines in the play. And when presenting a playwright with Shaw’s stature, one must do one’s best to be letter-perfect. After all, I did not write this play, and I ought to recite the lines that are there. I’ve been spending time in private study with my script nearly every day since beginning the show, and hope to go into opening night with that strong foundation.

Then, there is the vocal level. Eliza presents a particular challenge to me because neither of her dialects are ones to which I have any natural claim. As an American, I hope I’ve been able to develop a decent Received Pronunciation (RP) British dialect, but even that is only half the battle. The new challenge in this was learning the cockney dialect, particularly a cockney dialect that is not much used anymore. To learn RP, I can watch the BBC at length, but there are no modern examples of the cockney dialect, as Eliza would have spoken it. The closest examples come from modern historical dramas, like Call the Midwife. And then, because I am presenting this on stage to an American audience, I have to learn my cockney well enough to know where I can and ought to tone it down to avoid Eliza becoming completely unintelligible.

Finally, Eliza must physically transform. Oh, I am not talking about the costumes and the makeup, although those whose job it is to see to those have performed admirably. I mean the transformation of her demeanor and bearing. Despite her underlying steely resolve, Eliza begins the play as a woman who both knows the brutality of a life of poverty and also lacks any training on how to carry herself like a lady. She must be fearful, despite her natural personal fortitude, and she must carry herself like someone who’s never been taught to stand up straight. The dancer in me bemoans the sloppy posture necessary to play Eliza in the first part of the play, but I persevered and was rewarded with a visible transformation and a sore lower back. After her transformation, I was able to revert to my natural state of upright, dancer’s posture with relish.

And so I go on the stage tonight with the weight of three months of rehearsal and a century of history weighing on my back, only to shake it off and finish the play standing upright: “a tower of strength, a consort battleship.”