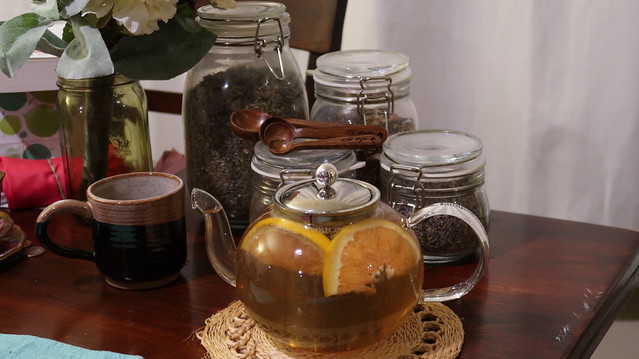 One of the constant battles among the community of tea connoisseurs is how to talk about infusions of plants that are not Camellia sinensis. There are those that are staunchly in the “tisane” camp — it’s not “tea” if it’s not from the tea plant. Others are perfectly happy to use the term “herbal tea.” Interestingly enough, history and linguistics bear out this camp, as the term “tisane” originally referred to a barley-based beverage and was not brought into the common lexicon to mean something other than C. sinensis steeped in hot water until modern times. In fact, in the 18th and 19th centuries, there was a recipe known as “beef tea” that was similar to a modern broth (interestingly enough, though Isabella Beeton’s 1860s book has recipes for “beef tea,” a similar dish made from chicken is called “chicken broth”). And I have found other instances of infusions of non-C. sinensis ingredients referred to as “teas.”

But this is a digression. You see, not all teas I drink are “true teas.” In fact, one of my earliest tea posts on this blog was my formula for my Gardener’s Herbal Tea, a blend of nettles, rosehips, red raspberry leaf, and oatstraw. Along with my love of C. sinensis, I’ve also had a passion for exploring herbal remedies since I was young. And in my Tea Primer, I expanded a bit on how I handle herbal teas (or tisanes or infusions, as you will) in general terms. But I would love to take more time in this space to talk about specific herbal remedies, and one of my tea goals for 2020 is to learn more about herbal traditions outside of the Euro-centric traditions I’ve primarily followed. So, to that end, I’ve decided to pursue some formal studies in herbalism.

This coincided with my own realization that I had stopped using one of my longtime personal herbal remedies, red raspberry leaf, since giving birth. I had been drinking red raspberry leaf tea for well over a year, starting from the time we first started thinking about trying to conceive, and on through my miscarriage, and then my pregnancy with Elliot. In fact, my pregnancy announcement on my YouTube channel was a tea session where I made a cup of red raspberry leaf tea. But I became thoroughly sick of it by the time Elliot was born (nearly two weeks late!) and had stopped drinking it in favor of other things after his birth. But in chatting with a friend on Instagram, I realized that I had always appreciated its support during my monthly cycle, and so I came home that night, mixed up a big pot of red raspberry leaf with chrysanthemum, orange, and some local honey for taste, and sat down with my mug in hand to explore my herbalism course options.

I discovered that one of the greats of herbal healing, Rosemary Gladstar, offers an online course that even has an option to sample just the first lesson for a modest price before committing the time and money to the full course. So I leapt at that and am now awaiting my first lesson to see how I like the course style. Hopefully, I’ll enjoy it, but for now I’m reading the books on herbalism I already have while I wait (along with maybe one or two new purchases), and have even ordered some fresh packets of herbs I’ve liked in the past. I’m excited to start this journey and have you all along with me, and I will almost certainly post updates as I progress!

First, a bit of self-promotion: Please take a minute of time to take a look at my current Volition Beauty campaign. I’ve spent the last few months in discussions with Volition to develop the idea for a dual-targeted, matcha-infused hair multi-masking system and I’m excited that the campaign is finally live. I would appreciate it so much if my readers would help vote this into reality!

So I’ve been a bit quiet lately and part of the reason for that is that I’ve been sick. It started last week with a bit of a sore throat, that seemed to peak and get better by Friday, but then came back, along with congestion and coughing, this past Tuesday. I spent Wednesday and Thursday at home, recovering. I’m feeling better, though still not 100%. 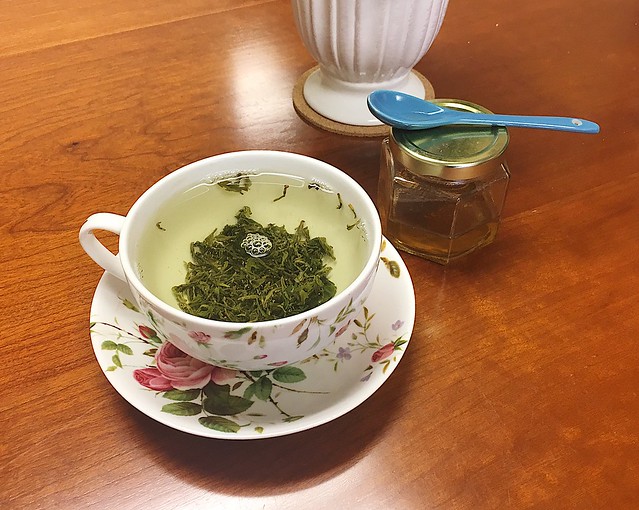 Because the first sign of illness was a sore throat, my regimen of treatment has focused heavily on tea with honey in it. I’ve split my tea between herbal infusions and the occasional cup of green tea. I find that when I’m home sick, it’s very easy to forget to have a cup of something with a bit of caffeine, and a caffeine withdrawal headache is not something I need on top of a bad cold. So I have a bit of a cup of green tea with some honey and then switch to herbals. My favorite this time has been ginger because it both helps soothe a sore throat and helps break up mucus. I apologize, but given the state of things, there was no way I was going to get through this post without mentioning mucus at least once. Twice, now.

At first, rest and honeyed tea were my main remedies, but my other favorite cold remedy is even simpler: salt water. For a sore throat, I mixed up a cup of warm salt water to use as a gargle on my raw throat. Later on, when the congestion set in, I used warm salt water in my neti pot to help clear my sinuses. Of course, I boil the water I use in my neti pot, just in case anything unsavory lurks in my water, and then let it cool until it’s comfortable to pour into my nose. It’s not exactly a fun thing to do, but it is effective.

Other than that, I’ve been getting lots of rest. I’m grateful that most of my job can be done from the sofa, so I’ve worked at home, away from coworkers I could infect. I would get up only to make some soup or some more tea. Luckily, it wasn’t a terrible cold, and I was feeling well enough last night to meet some friends for dinner, so hopefully I’m completely on the mend now and not going to relapse again. I hope everyone has a lovely weekend!

And, no, it’s not alcoholic. While I’m no stranger to the shot of whisky that helps cure a cold, this is something far more restorative. As I mentioned before, I’ve just recently recovered from a somewhat grueling illness that started with a bit of a sore throat, looked like it was becoming a cold, and then turned into the worst sore throat I’ve had in years. It went from the early-cold dull ache to the ragged, razor-y feeling every time I even thought about swallowing. Sadly, the doctor could not find evidence of strep throat (which would have meant antibiotics and a relatively quick recovery), so I was left to my own devices.

Now, lemon and honey and vinegar and echinacea have their places in my arsenal of illness fighters, and they all came into play. Cayenne, oddly, became my throat-soother of choice, as a spicy-sweet brew of raw honey, vinegar, and cayenne in water, gargled often, left my throat feeling much better.

But by far my favorite remedy was good old fashioned broth, or rather garlic broth. I found a company that makes traditionally-simmered bone broths and sells them vacuum packed in pouches in the freezer section at my store. I prefer the chicken broth. I defrost and simmer one cup of broth. While that simmers, I peel and finely grate one fat clove of garlic (or two smaller ones) into a mug. When the broth is hot, I pour it over the garlic. It’s not exactly raw garlic, but it still retains some of the heat and bite of raw garlic. I sip this and feel my throat feel almost instantly soothed. It’s also nourishing and restorative, particularly at a time when one finds oneself unable to eat much of anything solid. The broth contains protein and makes a welcome break from sweetened teas. And there is some evidence that chicken broth may actually have some true use against the common cold.

Whatever the science, I know this will become a go-to remedy, and even though I’ve started feeling better, I will probably continue my morning mug of broth throughout the winter.

As the weather has started cooling down, little by little, Boyfriend and I have noticed a peculiar problem: our house seems to be mildly infested with bees. It’s not great clouds of the little fellows, but rather one or two every so often. It’s gotten to where we are finding live or dead bees around the house almost every day. Sadly, this led to a rather awkward situation yesterday when I discovered a bee in my yoga room… by sitting on it during my practice.

I felt a little pinch, and immediately knew what it must be. I stopped my practice and went up to the bathroom to see the sting. It was already starting to turn red and swell, so I tried to locate the stinger and washed it with my homemade lavender soap and cold water. I patted it dry with some clean tissue and applied hydrocortisone ointment. A half an hour later, the pain was worsening, so I thought to try something more aggressive.

Remembering the drawing power of bentonite clay, I went to my beauty cabinet and mixed up a bit of the clay with enough rosewater and glycerin to make a thick paste, which I glopped on my posterior. Being that the location of the problem area was where it was, this was not something to be done downstairs, where decent neighbors might spy me through the window accidentally. So I lay out on my stomach with my pouticed rear unencumbered.

To suffer the indignity, I decided that part of the remedy would be a nice cup of tea and some chocolate. I believe it be a necessary part of treatment, if just to soothe my nerves. I also took the opportunity to contact our landlady and ask if something might be done about the apian threat.