A couple months ago, someone on Instagram suggested I post a tutorial for my standard daily bun, and when I was thinking about filming that, I realized that I haven’t done a hair update in a while. Not a whole lot has changed since my last update, in terms of technique, though the products have changed, but I’ve definitely spent a lot more time thinking about how hair care fits into my identity as a mother. 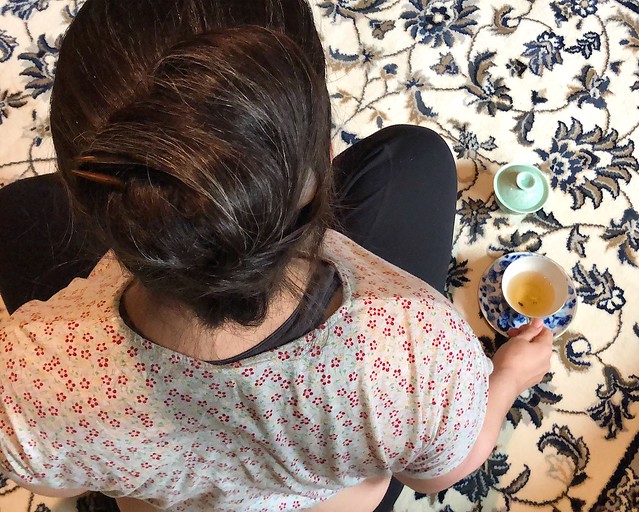 The “mom haircut” is almost a Western cultural archetype, a symbol of a woman’s changing identity upon becoming a mother. Kind of like mom jeans for your head. Apparently the modern idea of “mom hair” hearkens back to the mid-90s, when politicians were desperate to win the “soccer mom” vote, but the idea that a woman should change her appearance when she becomes a mother has deep roots, at least as far back as the “separate spheres” philosophy that situated women at the center of the moral compass for a family. Interestingly, the bob haircut has gone from a statement of protest against cultural norms of a woman’s place (see Joan of Arc or flappers in the 1920s) to a sign that a woman is fitting into her designated role as a mom.

There is also the undeniable convenience factor. Many women find short hair much easier to care for, and of course, the reality of postpartum shedding means that long hair is a lot more visible when it falls out in clumps on the bathroom (and bedroom, and living room, and kitchen…) floor. And I’ve definitely experienced that in the last few months.

But I have personally chosen not to get a “mom” haircut. While the hair loss is striking, my hair is still thick enough that it’s difficult to style into a contained style if it’s shorter than my mid-back. So as far as keeping my hair out of tiny hands, my best options are long enough to put in a bun, or a pixie. And since I can trim my super long hair myself, rather than visiting a salon every 6-8 weeks to maintain a pixie, long hair wins out for me. So I’ve decided to keep my long hair. It’s currently down nearly to my waist, and while I’ve noticed a decrease in thickness as it sheds, it’s still pretty thick.

Elliot loves to grab at my hair, so I generally keep it up and away from him. My go-to style is a bun called the Nautilus Bun, which I originally learned from The Long Hair Community. It’s a simple, well-balanced bun that sits close to my head and doesn’t get uncomfortable or heavy after a whole day. It’s a set-it-and-forget-it kind of bun. I can anchor it with a fork, stick, or a clip, and the construction makes it easier to fasten securely without being too tight. And it has a rather nice look to it. So that’s how I handle having very long hair around a baby. I do sometimes wear it in a braid during the day, and I always braid my hair at night, but I have to be careful to keep it away from curious hands. I posted a video of me putting my hair up in this bun on Instagram, but my favorite tutorial can be found here.

But how do I keep such long hair clean? Well, the most important thing to note is that most of my hair care takes place outside of the shower. I wash my hair 2-3 times a week, and I only condition in the shower once a week. This works for my hair, which is relatively sturdy, and that almost never experiences damage from dye or heat styling. I also condition my hair outside the shower, with leave-in conditioner and oil, so I can watch the baby and take care of my hair. Luckily, Elliot likes to watch me do my hair.

So that’s it. That’s how I care for my very long hair, even with a baby. I’ve kept up this routine throughout my maternity leave, including during my husband’s three out-of-town trips since Elliot was born. I really only need five minutes or less in the shower most of the time, unless I’m doing my once weekly deep conditioning, so it fits really well into my life. At this point, I think I might be seeing my hair loss start to taper off, too. I’m curious how others have handled the idea of “mom hair” in their lives.

I don’t talk as much about hair care on this blog as I do about skin care or tea, but I do touch on it occasionally. The fact is that I’ve been obsessing about my hair care routine for much longer than I’ve really cared about my skin care. I actually found out about Korean skin care from a hair care forum to which I used to contribute. So I thought I’d talk a little bit about my hair care philosophy again, and give a little update about how I’ve been caring for my hair. 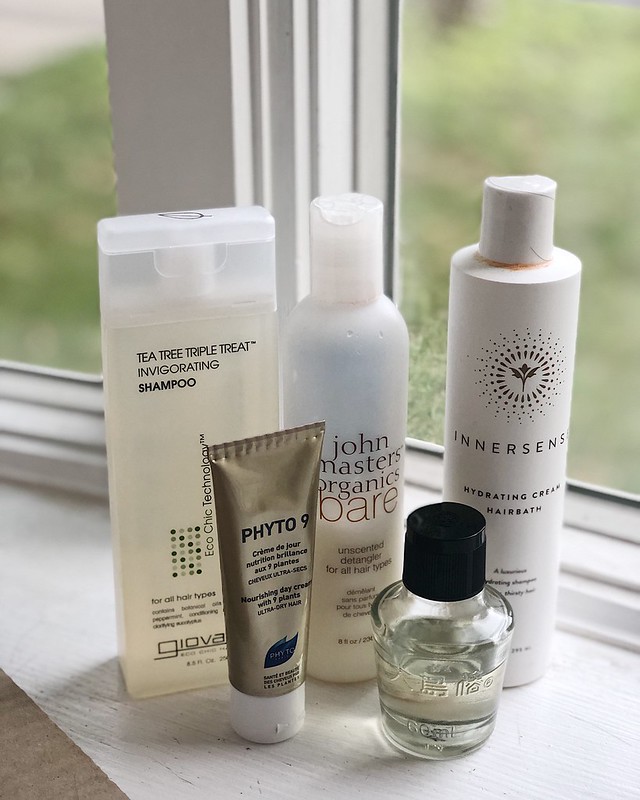 While I’ve had hair as short as a pixie and as long as mid-back, with every length in between, my hair care routine is always based on the care philosophy of people who are caring for ultra-long hair. Long hair is old hair, so the standard advice in the long hair community is to treat your hair like it is an antique lace table cloth. So, you want to handle your hair gently, keep it protected, wash it gently, and don’t wash it more than you have to.

Translated to hair care, that means that, in the long hair care world, people try to stretch out washing as long as possible, and use very gentle tools and styling. Which is what leads me to my title about the paradox of long hair care. You see, a lot of people consider long hair to be a lot of maintenance. I mean, you have a lot of hair, it’s going to take a lot of time to wash and dry. You’re going to need more product to coat it. And you need to spend time to style it.

But at the same time, I actually spend a pretty small amount of time on my hair on a daily basis. My current hair care routine is to wash it three times a week. On Sundays, I wash it with a more cleansing shampoo (Giovanni Tea Tree Triple Treat) and do a deep conditioning treatment by leaving an unscented condition on my hair for 5-10 minutes while I shave my legs. On Tuesday and Friday mornings, I only wash my hair, using a moisturizing shampoo (Innersense Hydrating Cream Hairbath), and then towel-dry it and apply a mixture of hair cream (Phyto 9) and hair oil (Oshima Tsubaki Oil). Other than that, I will occasionally rinse my hair if I get particularly sweaty or dirty, but mostly I just braid or put it up in a bun. Yes, it would take a long time to blow-dry my hair, but I don’t blow dry my hair very often. Most of the time, I let my hair air-dry as much as possible, and then style it gently. The biggest hardship is that sometimes my cat decides that my loose, drying hair is the best toy in the world.

Since getting pregnant, I’ve actually put some thought into whether or not I should cut my hair. But I’ve realized that short hair can have just as much upkeep as longer hair, and since I mostly keep my long hair up in a bun, I don’t think there’s much risk of getting it caught in things.

As far as styling goes, I generally stick to two basic styles these days. Either I braid it and fasten it with a metal-free band, or I put it into a bun and secure it with a hair pin or clip. Both of these styles are relatively quick and can be done with damp hair, as long as I’m careful not to pull damp hair too tight, since it is more delicate than dry hair. So on a normal day, I’ll spend maybe 5 minutes washing my hair, let it dry while I take care of the rest of my morning routine, and then less than 5 minutes to put it into a bun or braid.

But at the same time, I’ve spent a lot of time over the years thinking about my hair care routine. I have a similar sense of what my hair likes and dislikes as I do with my skin. So it has taken a lot of effort, if not a lot of day-to-day time. But since I generally prefer my overall “look” with longer hair, and don’t really like to wear my hair loose, I find the effort worth it.

Who’s intimidated by this little guy? Well, keep an eye out tomorrow morning for my first “Matcha Basics” video, inspired by @teawithjann, where I talk about how I prep a new matcha whisk (or chasen) and prepare a bowl of traditional whisked matcha on a regular day. Are you a matcha lover? What’s your favorite way to drink it? . . . . . #matchabasics #matcha #matcharitual #greentea #japanesetea #tea #cha #teaceremony #chado #teasession #morningtea #dailytea #tealife #teasofinstagram #matchatea #matchagreentea #teameditation #maketeahavezen #momentofzen #instatea
How perfect is this Nerve Tonic Formula 1 from @rosemarygladstar for Floral Friday? I’m very much enjoying my herbalism course and found this particular formula to be wonderful for a little tension headache this past weekend. Plus, it’s a delicious floral tea, along with relaxing lemon balm and milky oat tops. Anyone else have a favorite herbal ally this week? . . . . . #floralfriday #flowersofinstagram #flowersoftheday #floralphotography #gardeninspiration #gardenphotography #quietcalm #springblossoms #naturewitch #greenwitch #flowerfairy #inbloom #blooming #quietinthewild #capturequiet #underthefloralspell #moodforfloral #allthingsbotanical
This is the aftermath of teaching my mother about oolong and white teas. Today on the blog, I’m sharing my thoughts on the health benefits of tea. Read at the link in my profile. Do you ever drink tea for the health benefits, or just for fun? . . . . . #gongfucha #tea #cha #teasession #morningtea #morningcuppa #dailytea #looseleaftea #maketeahavezen #momentofzen #instatea #teainthegarden #seeksimplicity #chanuary
Have you seen my video first tasting of this gorgeous Taiwanese white tea from @mountain_stream_teas yet? You can find the video at the link in my profile. . . . . . #gongfucha #tea #cha #teasession #morningtea #morningcuppa #dailytea #looseleaftea #maketeahavezen #momentofzen #instatea #teainthegarden #seeksimplicity #chanuary #quietinthewild
Today I’m sharing tasting notes for two black teas from @georgiantealimited on my blog. Read my thoughts at the link in my profile. Have you tried any Georgian teas? . . . . . #teatastingtuesday #tea #cha #teasession #morningtea #dailytea #teaoftheday #tealover #teablogger #looseleaftea #teastagram #maketeahavezen #instatea #seeksimplicity #camelliasinensis #chanuary
I am not a tea purist. . If you like milk or sugar or bourbon or french fries in your tea, you do you. There are some flavors I don’t personally prefer, but tea has been made traditionally for millennia with all sorts of additives. In China, it was originally boiled like a soup with scallions and ginger. . This morning, it finally feels like winter again and I’m having dark roast hojicha from @hojicha.co with a little maple syrup. It was originally a bit of a joke because the company is Canadian, but the particular flavor of maple mingles so perfectly with the roasted flavor of hojicha. What’s in your cup today? . . . . . #hojicha #tea #cha #teasession #morningtea #morningcuppa #dailytea #teaoftheday #vintageteaparty #anicecupoftea #tealover #handmadeteaware #teaceremony #teablogger #looseleaftea #teasofinstagram #maketeahavezen #teameditation #momentofzen #instatea #seeksimplicity #chanuary