Well, it’s December, and NaNoWriMo is over for this year. Once again, I reached my 50,000 word goal, and I managed to actually wrap up the story I was writing. This year was interesting because I found myself floundering early on, got my groove back on my writer’s retreat, and then lost it again toward the end when I got distracted by a new project.

First things first: I did officially win NaNoWriMo. I actually wrote my novel in 26 days because I started a few days late after scrapping my original idea, and then I managed to cross the finish line a couple days early. This year was probably one of the hardest years because I both cared about the story I was writing and yet lost interest in it as the month went on. I also pretty much did the whole thing by the seat of my pants, which wasn’t a new thing for me, but it was a new thing that it mostly worked out.

I’m definitely putting this story away for a while. Probably a few months at least. While there may be something salvageable, I think it’s going to take a bit of distance before I can even consider rewriting or editing. But who knows?

In the meantime, I’m trying to keep that NaNo magic going to continue working on another project that I’ve been trying to get out. Unfortunately, once again, I’m seeing that the motivation just isn’t there. I’ve had a few days in a row of sitting around the house that I haven’t bothered to use for writing. But I’m going to try re-invigorate my writing habit, using the things I learned this month. In the past, the words just came. I could sit and write thousands of words in a sitting. This month’s NaNo novel was not like that. So it meant that I had to learn how to 1.) make myself sit down and write even though the inspiration wasn’t striking me and 2.) make the words come out when I was making myself have a writing session.

This was an important thing to learn, I think, and something I hadn’t really picked up in previous years. Before, when I started floundering, I either quit or just went off on a ridiculous tangent. So now, I hope to use this newfound ability to focus on my work to my advantage beyond November.

Because if I ever hope to be a serious writer (though I will never be a writer of serious topics), I need to maintain that kind of habit. Blogging is a help to this, though my readers know how I lack that discipline as well. But sitting and writing fiction every day would be a good habit, one that I will continue cultivating. And I thank NaNoWriMo for helping me re-invigorate it once a year. 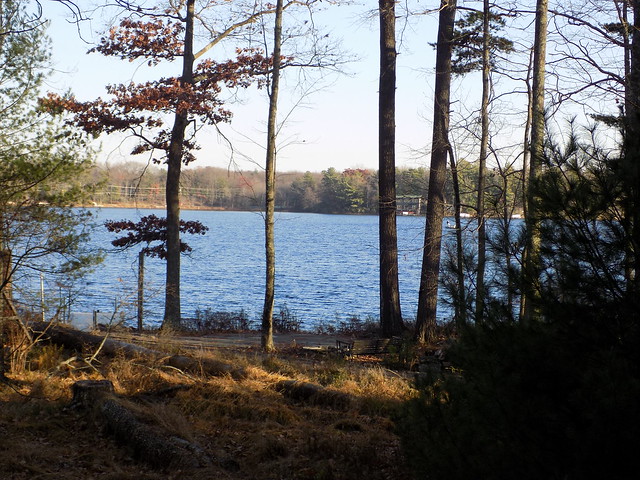 As you know from my previous post, I’m working on a novel for NaNoWriMo. What you don’t know is that this year, my story is set in a place inspired by the area around Fiancé’s parents’ lake house in the Poconos. When I mentioned to him that it would be nice to be able to write in the setting that is my inspiration, he immediately suggested we take a little weekend retreat up to the house so I could write and we could rather get away from it all. It’s a beautiful place, set back in the woods, right on the shore of a small lake. Now, in November, it’s much too cold to go swimming, but I enjoy the mornings and the chill in the air. And it is very peaceful for a writer. 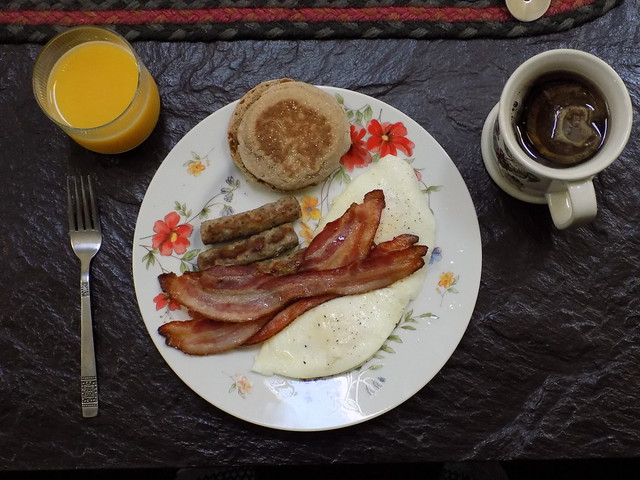 With nothing else to do, I spent the weekend writing, eating delicious hearty food, drinking plenty of tea and whisky, and just generally enjoying the peace, quiet, and beautiful surroundings. I shared a little bit of it on my Instagram story. And then, Sunday morning, we woke up to this. 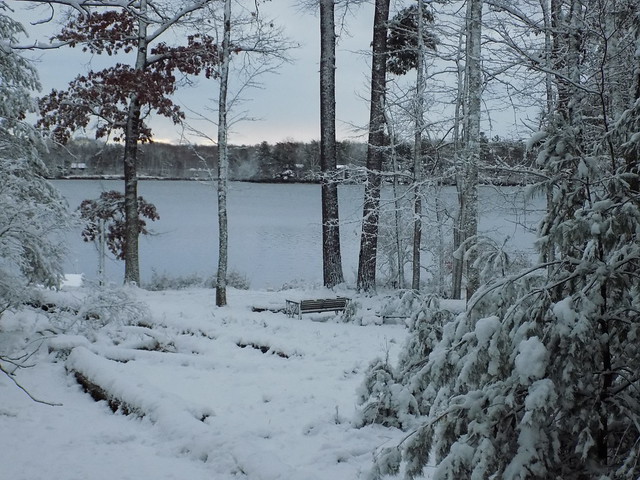 The beautiful autumnal landscape had transformed overnight into a magical winter snowscape. A thick blanket of snow covered everything, making this beautiful place even more peaceful, and it inspired me to bring winter to my novel. I’d never seen the lake in the winter before, so it was even a new experience in my inspiring setting. I continued to write, and then we called a plow to dig us out, so we could head back to our daily lives. I managed to write 10,000 words over a single weekend and figure out where I was actually going with the story, so it was overall a fantastic success. I hope the other WriMos out there are enjoying their November and finding their inspiration!

It’s November, and that means it’s once again time for National Novel Writing Month, or NaNoWriMo. For those of you unfamiliar with NaNoWriMo, it’s a challenge to writers of all kinds to sit down and type out a 50,000-word first draft of a novel-length work of fiction. The concept was started to try to encourage people to listen more to the little creative voice in their head than to the little critical voice in their head for just a month. Just long enough to get that first draft down on paper. Or pixels.

I’ve done NaNoWriMo a few times over the years. I’ve finished my 50,000 words three times and failed twice. I’ve even edited and polished one of the manuscripts and tried sending it to an agent (no dice). And now I’ve decided to try again this year. I have a story idea that’s rattled about in the back of my head for years now and that I’ve started and let lapse enough times that I think it will take the focused motivation of NaNoWriMo to get me through it.

And that’s the real beauty of NaNoWriMo: the motivation. I can write. I can write quickly. I can come up with ideas. I can come up with lots of ideas. But when I try to force myself to sit down every day and type out 1,500-2,000 words to keep a story moving along, eventually I just… stop. I just skip a day. Or a couple days. And then it’s a week. And then I’ve forgotten about the story and if I try to come back to it, I don’t really remember what I was going for. I’ve found it’s important to keep a story in your head pretty much constantly until you’ve gotten it all out. At least for me.

With NaNoWriMo, you get constant reminders. There are emails. There is a website with statistics and a forum full of like-minded individuals to keep your mind on your writing. And that’s the other benefit I’ve found in participating in NaNoWriMo.

When my mind is entirely immersed in my writing, I find very little time to worry about other things that aren’t completely vital to my daily life. Sure, I get my work done and I cook food and take care of life things. But I don’t have time for anxiety. I find that instead of sitting in bed unable to sleep because of my anxious internal monologue, I’m thinking about future chapters. I’m drafting conversations between characters. Or I’m just mentally exhausted from a day of writing. And I drift off to sleep in blissful peace.

It’s like a kind of meditation. My mind is so focused on one goal that it empties of extraneous thought. Part of me wishes I could find a way to keep this focus the rest of the year but most of me is just happy that I have it for the month of November.