Blessed Samhain to my friends who celebrate! In this season of pumpkin spice, I sometimes find myself craving something a bit deeper, so I thought I’d share a little tea I blended up for myself today. 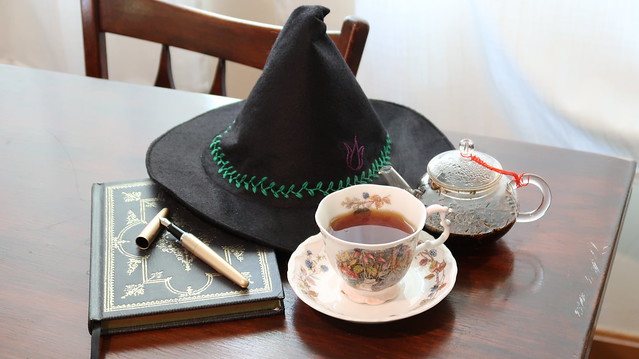 I’ve long had a complicated relationship with traditional “pumpkin spice” blends, as I’m not often fond of cinnamon, except in very specific contexts. More often than not, I prefer to focus on other spices, such as the cardamom and allspice in my Regency-inspired drinking chocolate recipe. And allspice, to me, is that certain je ne sais quoi that defines autumn spice. So my blend keeps allspice, but eschews the rest.

But what it lacks in spice, it makes up for in a deep, rich roasted quality that brings to mind cool forests and evening fires. Dark roast hojicha from Hojicha.Co gives that deep, smoky campfire note, while wild rooibos from The Rare Tea Company marries with the hojicha in a beautiful and inseparable way. I spoke yesterday about my previous dislike of rooibos, but this wild rooibos tastes of earth and wood and reminds me more of a good whisky than the insipid and artificial caffeine-free flavored blends I’d had previously. Combined with hojicha and allspice, this blend tastes like autumn in a cup.

I’ve left this recipe relatively unadorned, but I imagine it might be delicious with some additions. Add a splash of apple cider or maple syrup if you prefer something sweeter. A cinnamon stick wouldn’t go amiss, if you’re into that kind of thing. The most important thing is to experiment and have fun. 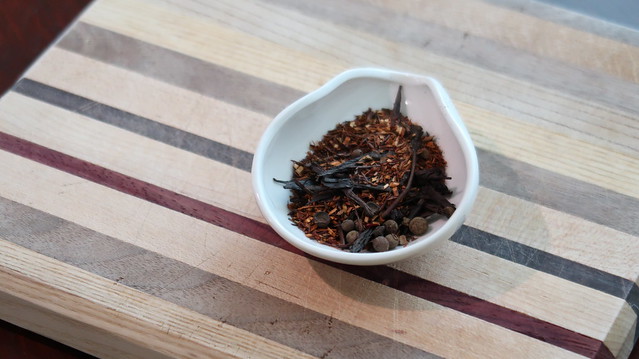 Add the ingredients to a teapot or infuser mug and pour 250ml of boiling water over them. Allow to steep for five minutes. Sweeten to taste, if desired, and enjoy. May be resteeped at least once with delightful results.

NB: All ingredients were purchased by me with no incentive to feature.

Happy Hallowe’en and blessed Samhain! In honor of the holiday that marks the beginning of the dark quarter of the year, I thought I’d talk a bit about the stories and legends I’ve encountered that deal with this spooky time of year. Hallowe’en falls at a time that is approximately halfway between the autumnal equinox and the winter solstice, so it’s about halfway from an equinox to the longest night of the year. And, really, Hallowe’en is around that time of year where you really start noticing that the days are getting shorter. All of a sudden, the sun isn’t coming up until I’m on the train, with my morning commute well under way. In fact, it’s probably not a coincidence that we change our clocks to give us a bit more light in the mornings right around Hallowe’en. 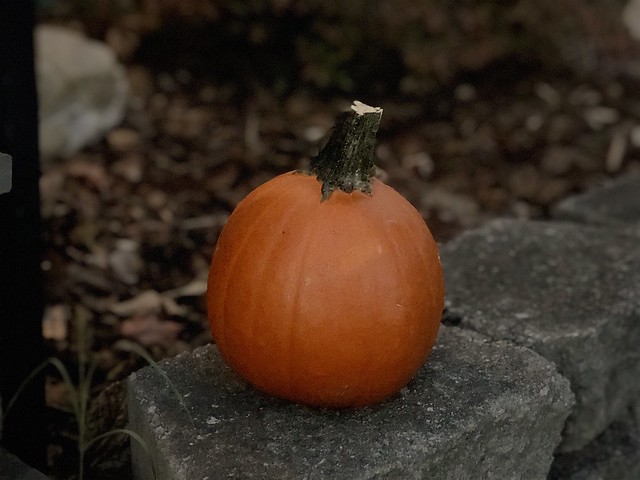 In folklore and legend, Hallowe’en or Samhain is the time at which the boundary between light and dark becomes thinner and, in many traditions, the veil between the mortal world and the spirit world is more easily traversed. In neo-Pagan traditions, Samhain is a time to meditate on your ancestors. It’s also no surprise that this thinning of boundaries would bring spirits and ghosts into the world, hence the Hallowe’en imagery involving ghosts and other supernatural beings. Divination was also said to be more successful at this time, which is a part of a lot of old Hallowe’en traditions, and most of which center around determining when and whom one is to marry [1].

But I’m here for the stories, not the general descriptions of traditions. And one of the stories that has the most explicit link to Samhain is the story of the Kelpie in Celtic mythology [2]. The Kelpie is a water spirit that takes the shape of either a human or a horse, and lives in water. In the Celtic story of the Kelpie, the sons of the chiefs of the tribes of Ireland are lured onto the back of a Kelpie in his horse form and dragged into the water because they stick to the horse once they’ve touched him (similar to the story of the goose that lays golden eggs). One man escapes by cutting off the hand that touched the horse, and goes on a quest to try to free the princes. He encounters a magician who tells him that the princes have been taken to the Otherworld, which is the Celtic spirit world, and the only time they can be brought back is during the feast of Samhuinn, when the veil between worlds is thin. I would definitely suggest reading the original story (or at least listening to the Myth Podcast treatment of it) because I haven’t done the complexities of the plot justice here, but suffice to say, they are successful in rescuing the lost princes.

Another legend that I’ve come to associate with Hallowe’en is the traditional folk theme of the Wild Hunt. I first encountered the idea of the Wild Hunt in the book Dead Beat by Jim Butcher in his Dresden Files series. In the book, a wizard can summon the Wild Hunt on Hallowe’en because it is the best time for the spirits to come through. After reading the book, I looked up more legends and folktales of the Wild Hunt and found that it has a deeply-rooted tradition in Germanic and Celtic folklore [3]. In Germanic traditions, the Hunt is often led by Odin or Woden, as a god of both battle and the dead. In Celtic tradition, the hunt is led by legendary heroes, including King Arthur in some traditions. There are also varying derivative traditions that have the hunt being led by any of a litany of unpopular figures at the time of the particular story. In general, the stories of the Hunt have evolved to be a party of infernal or evil characters. There is even a story in the American wild west, immortalized in song by Stan Jones, of damned cowboys who hunt the Devil’s cattle across the sky [4]. They warn the cowboy who sees them that he will join them unless he changes his ways (presumably to become a better person, although it’s unclear why the cowboy is particularly in danger of becoming damned). In this version, the unseen “leader” of the Hunt would be the Devil himself, dooming the spirits of damned cowboys to chase his herds forever. While the story doesn’t explicitly take place on Hallowe’en, it seems as likely a “dark and windy day” as any for a visitation of damned spirits.

Finally, no Hallowe’en festivity is complete without a Jack o’Lantern. So I thought I’d talk a little about the folkloric story of “Jack o’ the Lantern.” In Irish folklore, there’s a story of “Stingy Jack,” who borrowed money from the devil and then tricked his way into not giving up his soul when the debt came due [5]. Through a series of annoying deceptions, Jack ended up being barred from hell by an exasperated devil, but because he wasn’t exactly a good person, he wasn’t allowed into heaven. Doomed to walk the earth as a spirit for eternity, Jack found himself possibly worse off than if he’d just gone to hell. The devil ended up taking a bit of pity on him and gave him a perpetually-glowing ember to help him light his way, which Jack put in a carved-out turnip. From then on, he was known as Jack o’ the Lantern and was something of a will o’ the wisp type of spirit. Originally, people on the British isles carved turnips before the tradition was taken to North America, where there were pumpkins.

So there you have three stories of the season. What’s your favorite Hallowe’en or Samhain story?