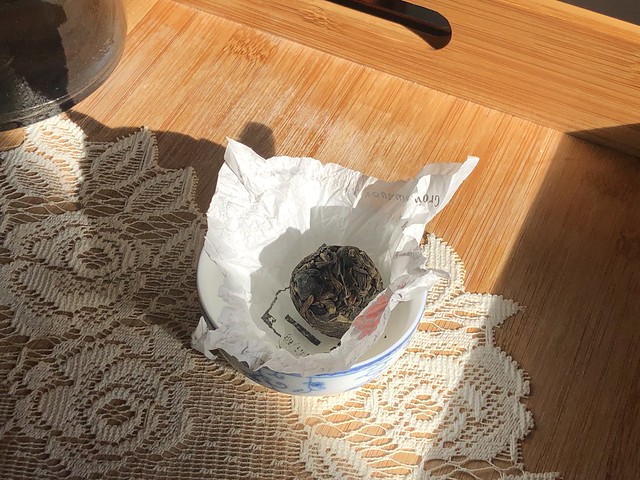 Yesterday, I posted to Instagram that I had been reading The Tea Girl of Hummingbird Lane. Well, that gave me a wild craving for sheng puerh, so I decided to dig out my Crimson Lotus Tea Elemental Puerh sample set. I’ve heard good things about this Bulang Sheng Puerh dragon ball, so I went for it.

I used one 8g dragon ball in my 150-ml classical flowers porcelain gaiwan with 99C water. I warmed the gaiwan and didn’t get much aroma off the dry leaf, just some light dried fruit and maybe honey. I rinsed it once and got a warm, sweet aroma off the wet dragon ball.

The first infusion I let go for fifteen seconds, after which I didn’t notice much aroma, just that same faint warm, sweet aroma as I noticed after the rinse. The liquor was a very pale champagne color and had little to no flavor or aroma. So I went on to the second steeping for twenty seconds, after which I started to notice an aroma that I can only liken to cheap sunscreen, although not in an unpleasant way. The liquor was a slightly darker champagne gold and had a light henna and fruit aroma. The mouthfeel was very smooth and honey-like with a slight sweetness.

The third steeping was for twenty five seconds. The wet leaf gave off aromas of dried apricots and honey. The liquor was darker gold, like a Tokaji wine, and smelled faintly of honey and spice, like a honey cake. The flavor took on some bright, citrusy bitter notes with a smooth, clean mouthfeel. I also noticed what I called “some sassy energy” from the tea in my notes. At the very least, I felt gregarious and a little mischievous while drinking it.

The fourth steeping was for thirty seconds and had that same sunscreen aroma on the leaf, with a pronounced grapefruit peel bitterness in the flavor. It was inducing saliva and the aftertaste was almost savory, rather than sweet like I’m used to with sheng puerh. It also made me hungry, so at this point, I paused for some lunch.

After lunch, I went for a fifth steeping, for thirty seconds again. Despite not having any taste of my lunch left in my mouth (I had some black tea with lunch to rinse my mouth), I found that the bitterness had all but disappeared, leaving a silky-smooth, almost oily-textured liquor with a citrus sweetness that danced on the tongue. It was almost like a hot lemonade, but somehow rich, like a soup. And it induced some lovely salivation, which tasted even sweeter. 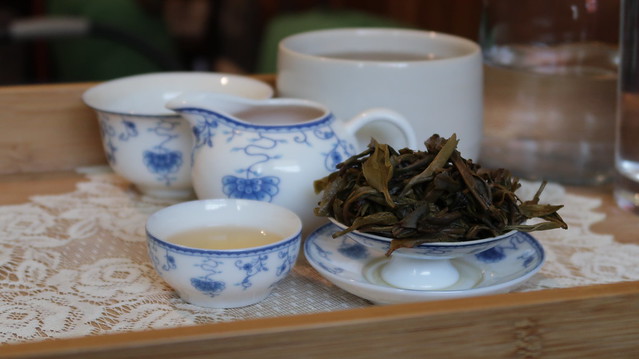 The sixth steeping, for forty seconds, resulted in a lighter leaf aroma with a small amount of bitterness, but mostly that same lovely, slippery, rich mouthfeel and some minerality. There was a tingle on the tip of my tongue. After the seventh steeping, for fifty seconds, I was still smelling sunscreen on the leaf and made a note that I’m curious what this tea will taste like in ten years. It was still silky, slightly oily. It gave me the impression of a whisky, if not the exact same flavor. The eighth infusion, for a minute, was more of the same. At this point, I decided to adjourn to sip the rest of this tea grandpa-style from my favorite mug and continued to enjoy it far into the day.

The “spent” leaves before I threw it in my mug were gorgeous with a mix of olive green and plum purple shades. There were some noticeable buds and beautiful slender whole leaves with fine serrations. After writing up my notes, I decided that I ought to buy more of this tea to keep around so that perhaps I will remember to taste it again in ten years.

This week, I’m starting a little series where I share tastings from the puerhs in Yunnan Sourcing’s sampler called “Introduction to Puerh.” I got this after my stitch and sip video where I was thinking that I should learn more about puerh. I’ve had really good luck with Yunnan Sourcing’s curated oolong samplers, so I figured they’d do a good job with a puerh sampler. The sampler has six different teas, half ripe and half raw puerh, with examples of each from a classic recipe, a single estate, and an aged sample. The aged samples are both older than fifteen years. 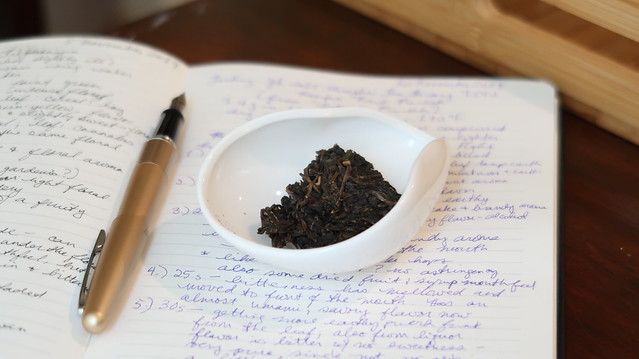 So on to this tea. The 2015 Menghai raw is a piece taken off a larger cake. I used 7.4g in a 120-ml gaiwan with water at 190F. The dry leaf, as you can see, is slightly broken from the compression into the cake, and has a medium-deep brown color with some lighter bits. It looks to have small leaves. After warming my teaware and the dry leaf, I got aromas of raisins and date bread.

I rinsed the tea and found the wet leaves gave off aromas of dried fruit on the gaiwan lid and damp earth on the leaves themselves. I steeped it starting wth ten seconds and increasing by five seconds each time, for eight steepings.

The first steeping had a light amber colored liquor and sweet malty aromas on the gaiwan lid, sweet and earthy aromas on the wet leaf, and a sweet fragrant aroma on the liquor itself. The mouthfeel was light, with a sweet and herbal flavor. The second steeping, some herbal aromas started coming out of the lid, while the leaf aroma settled into earthiness and a fruitcake and brandy aroma arose from the liquor itself. The liquor was slightly darker and had a rounder mouthfeel, with a spicy flavor reminiscent of alcohol.

By the third steeping, the bitterness started coming through. The lid and leaf aromas had taken on a henna aroma that I associate with raw puerh, and the liquor had a brandy aroma. The flavor had a pronounced but not unpleasant bitterness in the back of the throat with a floral and herbal quality to it, like hops. there was a little dried fruit in the flavor with no astringency and a syrupy mouthfeel.

On the fourth steeping, the bitterness mellowed and moved into the front of the mouth, with an almost umami savory quality to the flavor. The fifth steeping, I noticed more funky earthy aromas from the leaf and a purely bitter, non-sweet flavor from the liquor, with a tiny bit of dryness on the finish. The sixth and seventh steepings held steady with henna aromas and balanced bitterness with a dry finish. By the eighth steeping, it was still the same and I decided to finish the session.

The spent leaves were an even olive-green color and showed mostly broken leaves. I’m excited by this as a really excellent example of the delights of bitterness in a raw puerh, and I’m curious how the other samples compare.