Last week, I talked a little about some of my sustainability and simplicity efforts, but my most consistent attempt to reduce my footprint has got to be my love of reusing glass jars. Sadly, my husband (who, admittedly, does most of the dishes) does not share my love of jars and has even insisted that I curate my collection a bit in recent years. But I love a good jar, and trying to be more sustainable and low-waste has certainly reignited my desire to keep every jar I come across. 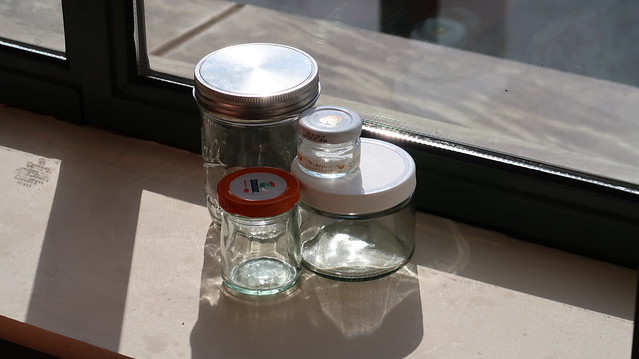 First of all, I try to find things in glass or metal packaging where possible because the bulk of a jar can be more easily recycled than plastic. I’ve been quietly switching things over to glass packaging where possible in most areas of my life. But the other reason I love buying things in glass is because I love to save jars. Recently, our store started carrying a new brand of French custard, which is delicious (and comes in chocolate, rice, and salted caramel!), but also comes in the most adorable tiny glass jars that are the perfect size for my own homemade pots de creme. Of course, my husband, who does most of our dishes, has a slightly less glowing view of my collection of jars and made me get rid of all but the number of jars that fits one batch of custard.

Jars are so useful, though. Lately, since I’ve been trying to shop in bulk more, I’ve found even more use for my collection of jars. I throw a couple into our reusable bag each week when do the shopping. It’s simple enough to take them to customer service to get a tare weight, and then I can get nuts or pasta or beans or rice or any number of things without any wasted packaging. Our store even has bulk honey, olive oil, and vinegars available, so I can get those (the olive oil goes into a bottle) without having bottles that will need to be thrown out. And since the honey is local, it’s the most sustainable way to sweeten. I’ve been using bulk hazelnuts, bulk salt, and bulk honey (and tap water) to make a milk substitute for my morning beverage lately, without any extra waste.

But jars are also not terribly bulky, especially when I save smaller jars, like the jar I got some beans in a few years back. It’s the perfect size to carry some home-blended tea to work, or pop into the shopping bag to get a treat from the bulk bins instead of a wrapped candy or trail mix. And I even recently used one of my tiny custard jars to bring some loose-leaf decaf Earl Grey to a brunch at a friend’s house because I know my mother prefers that and my friends didn’t have any decaf tea on hand.

The one tip for life with jars that I have is this: Know that standard mason jar lids are not stainless/rust-proof. This was never an issue for years (except for the one time I tried to store vinegar in a mason jar) because we hand-washed everything, but since moving to a house with a dishwasher, we’ve realized that the lids that came with our mason jars have started to rust. So the one new jar-related purchase we’ve made is to buy stainless steel mason jar lids. The fit is a little fiddly, and they’re not appropriate for canning, but it’s nice to not have two pieces of lid when I’m trying to pack up pumped milk or bring a jar of soup to work.

What about you? I’ve started up multiple conversations recently with friends and acquaintances who share my love of jars, so I’d love to hear about your favorite jars in the comments.

The other day, while walking out of a meeting, my coworker commented on how “green” I was because I hadn’t printed out the meeting document, in favor of bringing an electronic copy on my tablet, along with my notebook for any notes I needed to take. I showed him one better and showed that I’d also brought my own cloth napkin to have a treat during the meeting (this month’s treat was cupcakes) instead of using a paper plate and napkin. It was nice to have these little efforts recognized because over the last several years, I’ve quietly tried to make small changes towards a less wasteful, more sustainable lifestyle, including bringing cloths with me to work instead of using so many paper towels and napkins. 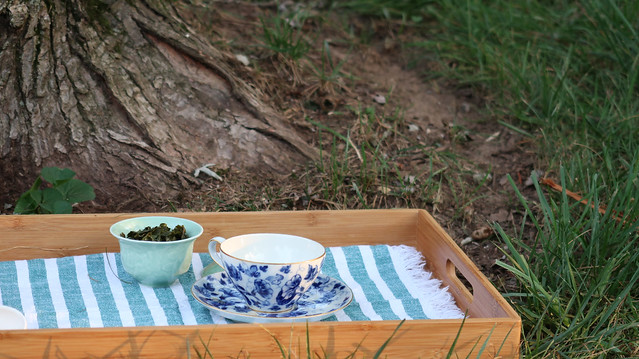 Probably the biggest change to my life that I’ve been trying to make, with varying levels of success, is my attempts to reduce my overall consumption. Whether I’m changing my buying habits of new (or new-to-me) clothes, reducing the way I use personal care products, or making small changes to how we eat, simply buying less is always going to be the most sustainable thing a person can do. Rather than buying new linen towels (linen is very eco-friendly, didn’t you know?), we’re using the towels we have until they’re no longer serviceable. Rather than buying new clothes, I’ve bought second-hand or even taken castoffs and loaners from friends. And my beauty routine is slowly creeping towards something very different from the sprawling, globe-circling routine that I’ve shared in the past.

Really, there is something very civilized about simplicity sometimes. I’m not Kon-Mari-ing anything (although we have been doing some of the decluttering that should have happened before we moved), but I’m trying to make steps towards reducing the need for such a chore. And, really, I’d rather wear the same two skirts for work all week than spend more than a little time on the weekend doing laundry or clearing out my closet. People view it as “strong personal style” rather than “wearing the same thing every week.” Plus, I’ve been quietly transitioning my wardrobe towards entirely natural fibers, and then towards more sustainable fibers (like the aforementioned linen). It’s expensive, so the process will be slow anyway. I’m less engaging in minimalism as I am asymptotically approaching it by bringing less into my life.

And that’s the crux of it, and part of why this is a quiet effort and not one that I would really recommend to anyone, because it’s part of a very personal value judgment. For me, I know I can “get away with” wearing as much of my pre-pregnancy wardrobe as possible, and buy a few necessities, so that if I spend more money to buy from a seamstress who makes all her pieces herself and charges accordingly out of sustainably-grown fabric, it doesn’t matter that I can really only afford one new piece of clothing every month or so. Or if I decide to make my own new skirt for the coming cooler months, I can choose to order my fabrics carefully and spend a month sewing it by hand, rather than needing to get a fall and winter wardrobe all at once. But not everyone has that luxury.

Or in the case of my skin care. I’ve already spent years honing my skin care routine and determining my skin’s general likes and dislikes, so I can buy products with relatively confidence online, so when I want to transition from less plastic packaging, I can try a new facial oil or cleanser or hydrating serum without as much of the unknown looming. And it helps that my skin has calmed down incredibly since my pregnancy (touch wood). So far, I’ve transitioned most of my skin care to simpler products that are largely produced by small companies (or people I know somewhat personally, through social media) and are mostly packaged with less plastic. There are a couple things I know I cannot swap out, despite their plastic bottle, but I know where I can recycle those containers now. Once I’ve tested the last new potential product, I’ll do a skincare update, I think.

And I’m fortunate to have the support of my husband, who has made great strides in reducing his use of papers towels and coffee filters. We’ve now almost entirely switched over to using cloth towels instead of paper ones, especially for our napkins. Somehow using cloth paper towels was an easier leap than trying to use our stock of gifted cloth napkins because the napkins seemed fancier. Now we have an eclectic pile of napkins and towels that we use at meals or for small spills. And Dan uses a cloth coffee filter in his coffee cone every morning. It seems very civilized, but really, it’s just a way to make less trash. Like using a fountain pen: I see a way to generate less waste in the form of discarded pens because I can simply refill the cartridge, but also, it’s a fancy pen and I look fancy using it.

Of course, the quintessential civilized sustainability swap for me is my tea. Now, I don’t pretend that my tea is at all a sustainable habit. I get most of it shipped from halfway around the world in single-use packaging, despite my attempts to save tins and reuse them. The fact is that tea has to be sealed to prevent it from going stale. But using loose leaf tea with my tea ware (much of which is either handmade or secondhand) offers a bit of an offset, as I don’t create any additional bits of litter in the form of teabags. And I can have several cups of tea from one serving of leaves, rather than using many teabags per day. Plus, as far as hobbies go, sitting quietly and enjoying the outside with a cup of tea is far simpler than many others, and helps to quiet my mind so that I can find contentment with what I have, which is the ultimate sustainability.