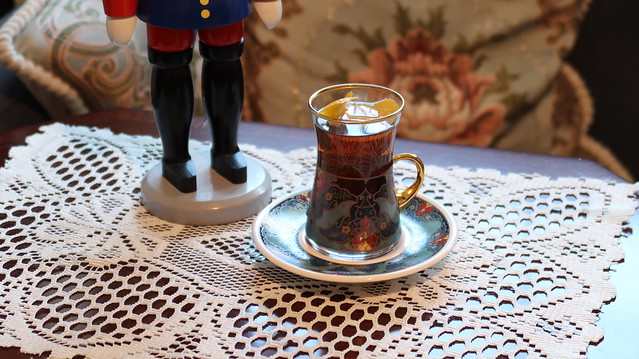 While I am not typically a big drinker, I do love the occasional cocktail. I often have them out at one of the wonderful bars or distilleries in DC, but once in a while I like to make my own. Now, I like classic cocktails, so when I found out that Daly’s Bartenders’ Encyclopedia from 1903 was available in its entirety on Google Books, I had to take a look. It’s commonly believed that cocktails were popularized in the 1920s when Prohibition led bartenders to mix lower-quality, homemade booze with other ingredients to disguise the flavor, but this book, released more than 15 years before the beginning of Prohibition, contains a multitude of recipes, including some familiar favorites.

In exploring the recipes, I learned that tea was actually part of some traditional cocktail recipes, and it was a common ingredient in punches, so I reached out to Tea Sparrow again to see if they were interested in providing me some teas to work into my Edwardian-era cocktails. Rather than just sticking straight to the recipe, here I’ve decided to take three recipes and play with them a little. One is a tea-based cocktail on its own, but I’ve given it my own twist, and the other two did not originally include tea, but they work with it well.

The teas for these cocktails are from Tea Sparrow, who previously sent me their subscription box and who make some of the only flavored teas that I’ve actually liked recently. They’ve generously offered my readers a discount, which is at the bottom of this post. 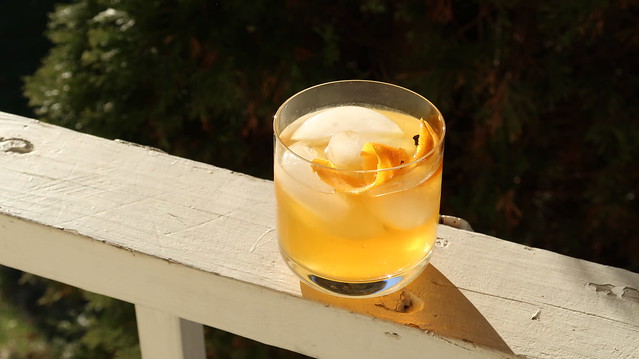 This was the original recipe that started the idea. Originally, a tea cobbler likely would have been made with black tea, but I decided to make a version with Ruby Oolong, since the flavor is interesting and refreshing, with a depth that suits colder weather. Despite being a cold cocktail, the combination of fruit, tea, and rum would make a nice pick-me-up at a holiday brunch.

This one came to mind when Dan got a nasty cold and we were talking about a hot toddy, and Daly’s Hot Whiskey Cocktail is like a fancy hot toddy. I realized that any of the hot water cocktails from Daly’s guide could be made with tea in place of the hot water for a lovely hot tea cocktail. When I saw the Cardamom Cream tea on Tea Sparrow’s website, I knew it was perfect for this classic cocktail. The Cardamom Cream is based on Earl Grey tea, with rose, vanilla, and cardamom, making this a delightful twist on an Earl Grey cocktail.

And, oh boy, was I right! Daly suggests serving this in a hot whiskey glass (which is similar to an Irish coffee glass), but as I lack one of those, I served it in a Turkish tea cup because the combination of rose and cardamom in the tea made it seem appropriate. I put one teaspoon of sugar in the bottom of the cup, topped it with tea to about halfway full, added a dash of Angostura bitters, and then 1.5 oz. of bourbon whiskey. I garnished it with an orange twist rather than a lemon twist because I love orange and cardamom. This was probably my favorite of the three — it was the perfect blend of flavors, sweetness, and warmth.

Daly suggests that it is perfect to warm up after driving or automobiling in chilly weather, but I think it’s perfect for after shoveling show or taking a winter morning walk. Or just for relaxing inside with your nutcracker. 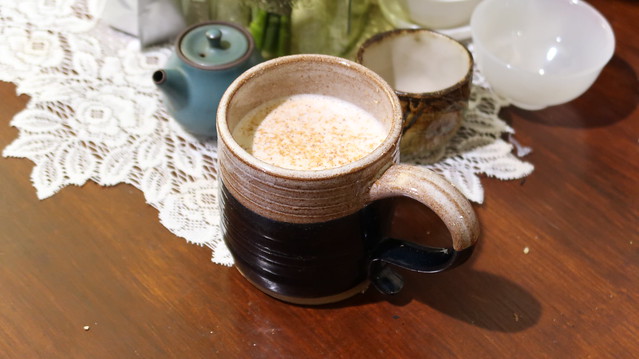 The Hot Egg Nog was an interesting recipe because I had just been playing with adding store-bought egg nog to my tea. I blended the recipe for hot egg nog and brandy egg nog, and added cacao shell tea to give it a chocolate-y kick. The original recipe called for two ounces of liquor, but I cut it down to an ounce and a half, which was the perfect amount.

First I heated a cup of whole milk with a rounded tablespoon of cacao shell tea on the stove over medium-high heat until it reached about 180F (when tiny bubbles appear around the edges). I turned off the heat and let it steep for five more minutes, and then returned it to 180F. In a small bowl, I whisked together two teaspoons of sugar with an egg yolk and an ounce and a half of brandy until well-mixed and slightly lighter in color. Then, I slowly strained in the hot milk while whisking constantly (it helps to have a friend to hold the strainer). This was poured into a mug and garnished with a grating of nutmeg.

This packs a kick, probably from the hot milk vaporizing the alcohol above the surface of the drink, but I love the combination of milk, brandy, and the light chocolate flavor of the cacao tea. It reminds me a little of the Swiss chocolate ice cream at a local ice cream parlor we went to when I was a child, which was a very light chocolate ice cream. And having it warm makes it feel cozy and comforting. It’s perfect for an evening in, especially since the cacao shell tea has no caffeine to speak of.

NB: Tea Sparrow sent these teas for free in exchange for being featured in this post. You can use the code “TeaLeavesandTweed” for 20% off your first order, or 20% off your first month if you purchase a subscription. If you are interested in collaboration or sponsorship, please contact me.